By Colleen Sparks
If you like to explore historic homes in the area, there are plenty of opportunities to do so while mingling with their owners this month and in March. 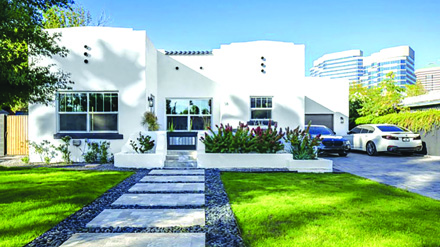 The A. Westerwick House, built between 1926 and 1928, is a classic example of Spanish eclectic design. The house will be part of the Willo Home Tour on Sunday, Feb. 9 from 10 a.m. to 4 p.m. (photo by Alex Rentzis/SpartaPhoto).

During these tours, you can walk inside the homes to see original architectural features that make these houses unusual, as well as see any upgrades the owners might have made and chat with neighbors.

The Willo Home Tour will take place from 10 a.m. to 4 p.m. on Sunday, Feb. 9, west of Central Avenue between Thomas and McDowell roads from First to Seventh avenues.

Coronado Neighborhood Association will offer its Coronado Historically Modern Home Tour and Street Fair from 10 a.m. to 4 p.m. on Sunday, Feb. 23, based at Coronado Park at 1717 N. 12th St., where there also will be music, many vendors, food trucks and a beer garden.

Homes in the Coronado, Willo and Windsor Square neighborhoods were built in the 1920s and 30s, during the era of flappers and later the Great Depression.

Jefferson Berkley and his husband Rocky Gonzalez will open the doors to their restored house, which was built in 1938, at 5033 N. 6th St. in the Windsor Square Home Tour. The four-bedroom, three-and-a-half-bathroom house is a combination of cinder block and stucco.

“I love the uniqueness of being historic and the style and what not,” Berkley, an interior designer, said. “Most people mistake it for a contemporary home from now or the mid-century. It was definitely ahead of its time.”

The home still has many of its original features including concrete floors with concrete baseboards and its French doors and it has a “very open concept,” he added. Berkley and Gonzalez plan to add another 800-square-feet to the house after the tour. That will bring a new master bedroom suite into the house. A big change to the original design is a former carport was converted into another bedroom in the 1970s or 80s.

To learn more about the Windsor Square Home Tour, visit https://windsorsquarephoenix.com. For details on the Coronado Historically Modern Home Tour and Street Fair at eventbrite.com/e/coronado-historically-modern-home-tour-street-fair-tickets-57434879270 and for information about the Willo Home Tour visit www.willophx.com/home-tour.