By Colleen Sparks
Angela Barba and her husband, Sean, have hearts for helping children and quickly bonded with the foster children they cared for in their home but their journey to adopt one of them hit a major obstacle that could have forced them to lose him. 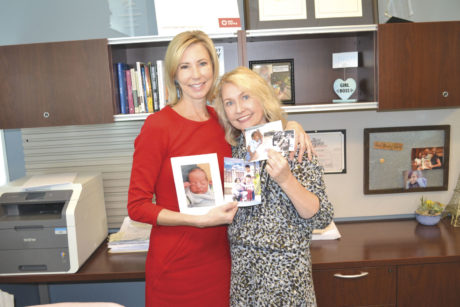 Darcy Olsen, on left, founder and CEO, and Rebecca Smith Masterson, vice president and chief counsel, for the non-profit organization Generation Justice, hold photos of children they cared for as foster parents over the years. Their non-profit aims to protect foster care children (photo by Colleen Sparks).

That is when the couple had to fight to keep custody of the young boy when his biological grandparents expressed an interest in adopting him. Luckily for the Barbas, they were able to keep and adopt the little boy thanks to legal help they obtained from Generation Justice, a non-profit organization based at 3900 E. Camelback Road that advocates for foster care children. At the helm of the non-profit organization are North Central Phoenix residents Darcy Olsen, founder and CEO, and Rebecca Smith Masterson, vice president and chief counsel.

Barba said that the young boy had been severely abused and was close to death when they became his foster parents in 2017. His grandparents, who lived out of state, had never met him but when they learned of his birth in 2018, they decided they wanted to raise him. However, Angela said doctors warned that moving him to another home would be harmful as he had bonded with the Barbas and was suffering major health problems. Making their case in court to keep their young son would have been expensive and difficult without the assistance from Generation Justice, which immediately connected her with Smith Masterson and another attorney working on behalf of the non-profit. Generation Justice provided legal assistance at no charge to the Barbas, which included calling an expert witness to testify in favor of keeping the boy with the Barbas.

“For us to be able to try to fight and be a party to the case, we had to file to intervene on the case,” Barba said. “It’s a lot of money and it’s very hard to do for a foster family. We never could have done that without Generation Justice. It was amazing. They literally dropped everything and made it possible for us to meet with them. They are literally helping the most vulnerable population in Arizona.”

Barba said their youngest son, who is 3 years old, still struggles physically and sees many specialists but is making progress and is “a totally happy kid.” She and Sean also adopted another, older, boy after fostering him and they have three biological children. The couple served as foster parents for four other children, who were later reunited with their biological families.

Olsen and Smith Masterson say many children in the foster care system are being abused and neglected. They started Generation Justice in 2017 as a way to push for laws and provide other ways of protecting innocent children. The organization represents abused children, pro bono, in their court cases and provides free legal trainings to anyone trying to help foster kids in order to ensure the children’s best interests are being met. Smith Masterson manages the legal clinic, which goes to churches, schools, agencies and anywhere else to provide trainings. Generation Justice also lobbies for and has successfully gotten several laws passed that aim to protect foster care children. The organization has helped 35,000 foster children through the laws it has helped get adopted and it serves more than 200 kids every year through the legal clinic.

“We really are the 9-1-1 for foster kids,” Olsen said. “We need to make sure the children are able to see equal justice under the laws.”

The cause is close to Olsen and Smith Masterson’s hearts. Olsen has been a foster parent to 10 children and she adopted four of them. Smith Masterson fostered and then adopted a boy when he was 17 years old and also adopted a child from China.

Olsen, who has worked extensively in public policy, said she had planned to foster a teenager but then was contacted to see if she would take in a baby exposed to methamphetamines and that began her foster parent journey. Smith Masterson was helping her now-adopted son as his pro bono special education attorney, then decided to foster him. He had lived in more than 40 different homes and at one point had said he wanted to commit a non-violent felony so he would be sent to prison in order to have a shelter and regular meals. Smith Masterson said he had several backpacks that he had been given with school supplies every time he moved. The backpacks were appreciated but not enough to aid the teen.

“I was his 46th placement,” Smith Masterson said. “We’re trying to fix the bigger problem. He needed a family, not a backpack.”

Smith Masterson said her son later earned his GED and is now in the U.S. Army.

While Generation Justice helps foster families advocate for themselves, Olsen and Smith Masterson stress that they always try to help the kids get into the best permanent, loving home that is healthiest for them, whether it is with foster parents or biological family members. Their goal is to try to implement the same protection for foster children that youths in any other home setting with biological or adoptive parents would have including trying to help authorities rescue the many kids who disappear from foster care each year, who become vulnerable targets for sex trafficking.

Generation Justice has helped get six laws passed in Arizona, including ones that decrease the time it takes for infants, toddlers and older teens to get adopted, expedite the search for relatives and require immediate judicial review of serious cases in order to help decrease foster children and teens’ deaths.

The non-profit organization, which has a small staff but many volunteers, can always use support, both in terms of financial donations or volunteer time.

While becoming a foster parent can be difficult as it is unknown how long the child will stay in the home, it is well worth it to help improve kids’ lives, the experts said.