Home / Features / Growing gardens to help those in need

Growing gardens to help those in need

By Colleen Sparks
A former Phoenix Mercury player is getting her hands dirty literally as she cultivates her new non-profit organization that is grounded in gardens where vegetables are grown for people in need. 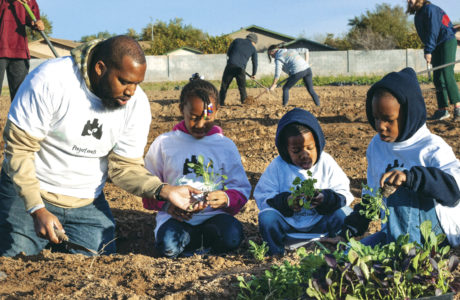 Volunteer Isaiah Norris works in a garden with his children (from left) Anaya, Nehemiah and Josiah as part of a Project Roots, Inc. project. Former Phoenix Mercury player Bridget Pettis started Project Roots, which grows and provides fruits and vegetables, as well as soup with the vegetables, to people in need (photo by Samantha Talavera).

Bridget Pettis, a WNBA champion and long-time North Central Phoenix resident who now works as assistant coach for Chicago Sky women’s basketball team, started the non-profit organization Project Roots, Inc. The organization’s purpose is to teach and feed homeless people with its community garden and mobile kitchen service. Her non-profit recently gathered friends, families and volunteers to start their first crop plan on a farm and it plans to hire a farmer. Project Roots also would love to have donations including vehicles for the farm and soup kitchen, as well as garden equipment and supplies and kitchen equipment and supplies.

Pettis has gotten her hands dirty learning about gardening at Agave Farms at 4300 N. Central Ave. slightly south of Camelback Road, over the last two years. She began giving the food she grew to area food banks.

“I really wanted to get healthy food to people who can’t easily afford to go out and buy this food,” Pettis said. “Why not put it where it’s best served, back into the community?”

She began making soups out of the vegetables she grew. Now on Sunday afternoon Pettis and volunteers hand out soup grown from garden vegetables to homeless people in downtown Phoenix. They also donate fruits and vegetables grown at Agave Farms and on the Spaces of Opportunity farm in south Phoenix to The Cultural Cup Food Bank Inc., which is based at 342 E. Thomas Road, once a week.

Pettis, family members, friends and volunteers also recently planted seedlings at the Spaces of Opportunity farm. She acquired a quarter acre of land there and Project Roots has given some of that space to eight families in need to grow their own vegetables and fruits on there.

The former Phoenix Mercury player is passionate about helping everyone have access to good nutrition.

“I really felt like if people felt better than they would think differently; they feel better, they might be motivated to go try something, not give up,” Pettis said. “Everyone can grow their own food. That’s my point of Project Roots is to encourage my community to grow their own food. I’m an athlete and I’m a coach. I tell my players, ‘You’re going to play your best basketball when you feel your best, when you feel better.’”

She and the volunteers have planted 800 seedlings for chives, lettuce, carrots, kale, collard greens, broccoli, arugula and other vegetables.

Pettis and her partner, Dionne Washington, Project Roots director, involve their three children, ages 14, 13 and 12, in gardening and preparing the soups.

Isaiah Norris of Phoenix recently brought his children Anaya, 8; Nehemiah, 6 and Josiah, 4, to plant seeds in the south Phoenix garden. He is friends with Washington and Pettis. The owner of Norris Business Consulting, he had served as their consultant for other projects.

“It’s very much needed on so many different levels,” Norris said of Project Roots. “There’s just a lot to learn from gardening and growing your own food. My kids, they love getting out there.”

He said he also works for the City of Tempe as a housing specialist assisting homeless people so Project Roots’ mission is “near and dear to me.”

“It’s pretty rare to come across someone as passionate as Bridget,” Norris said. “This is something she truly believes in. That’s been really great to kind of experience and even to expose my children to. She’s always got something green around her. It’s her life.”

Project Roots also is trying to plant 200 trees at the Spaces of Opportunity farm in south Phoenix on Saturday, Feb. 15. For every tree purchased, a farmer with The Urban Farm Fruit Tree Program will donate $20 to the project. To buy a tree, visit https://store.urbanfarm.org/treedonation.