By Colleen Sparks
Momentum is building to try to bring sweeping upgrades to Sunnyslope, as shown when residents, business owners, non-profit organizations and neighborhood groups recently rolled up their sleeves to give an historic building a major facelift. 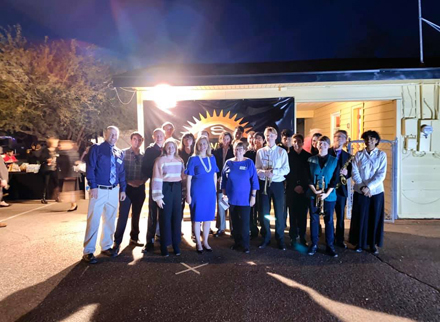 The Sunnyslope Village Alliance threw a “Sunnyslope Swank” community gathering to celebrate the grand re-opening of its building at 755 E. Hatcher Road last month. Norton Vista Neighborhood Association sparked interior renovations to the house that was built decades ago and many businesses and residents volunteered their time and materials to create the enhancements, which included new wood floors.

Besides supporting the Sunnyslope Village Alliance building getting new life, the Hatcher Urban Business Alliance (theHUB) plans to keep working with city of Phoenix officials this year to discuss residents and business owners’ ideas to make sidewalk improvements, add street lighting, create artistic waste receptacles and implement other changes to revitalize the community. It already surveyed people in Sunnyslope to see what they thought the biggest priorities were for the area.

Of those surveyed, 67-percent said sidewalk improvements are the most important to accomplish this year in Sunnyslope. Of the respondents, 58-percent said pedestrian/street lighting was the most vital to complete this year and 55-percent said artistic crosswalks were the most needed projects in 2020. Bike lane/bike racks, street events, cafes, safety signage saying “No Trespassing,” traffic control – turn lanes and street-integrated art were also noted as priorities though not as high on the list of priorities among those surveyed.

“The point is to say that Hatcher Road has been talked about for the longest time,” Lobo said. “It’s just continued to be a light industrial and neglected street. Now it’s kind of the heart of the city in more than one way.”

She added the document aims to “get people excited” about the possibilities for improvements in Sunnyslope. Some ideas revealed in the document include putting benches along streets, installing sculptures and other street art, adding security and lighting, building sidewalks and planting trees to offer shade. Integrating pocket parks into areas of Sunnyslope is another proposal in the paper.

“I can’t say enough about that folks really need to invest in this place,” Lobo said. “Any time you have a group of people who want to see the change and are part of that change and are investing their time and energy, change happens.”

Lobo said city of Phoenix streets employees would come to future theHUB meetings to talk about what is required as far as zoning for improvements to be made on streets. TheHUB also has been working with the city’s economic development team to discuss ideas for revamping the area.

“When you talk about Renaissance it just begins to scratch the surface of what’s happening,” Gallego said. “It really is an exciting time for this community.”

Lily Williams, coordinator of the Norton Vista Neighborhood Association, said many businesses and volunteers contributed their time and materials to renovate the building, in which the neighborhood association meets. New wood floors and tabletops were installed, new lighting was added, new plumbing and electrical work was done and walls were painted in bright colors. A room is styled to accommodate children, in case neighborhood association members want to leave their kids in there during meetings. The goal is to attract other community groups to meet in the newly renovated building and to offer classes there.

“I love how it turned out,” Williams said. “Thank you to all the people (who helped). This should have cost tens of thousands of dollars. It cost very little.”

Candy Berkner-Frogozo, president of the Sunnyslope Village Alliance and co-owner of North Mountain Brewing Company, also was thrilled with the renovations.

“We always wanted to give the building to the community,” Berkner-Frogozo said. “It’s just amazing. It’s just really fresh. It makes you feel like you’re home.”