Restaurants adjust, bounce back from shut-down

By Marjorie Rice
It was a sunny, breezy Saturday afternoon at Huss Brewing Co., and customers filled most of the tables at the Uptown Plaza taproom and patio, sipping beer and downing green chile pork sliders and Sonoran hot dogs, among other savory samplings.

At the entry, general manager Mike Chapman and server Shannon Toohy greeted customers, who could grab a spritz of hand sanitizer and a free face mask, if they wished, on the way to their tables (where more hand sanitizer awaited). 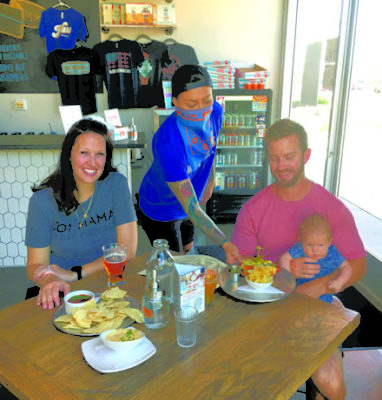 Gentry and Tanner Fields and their nine-week-old son, Creager, enjoy a day away from home at Huss Brewing Co., as they are served by Kala Stone (photo by Marjorie Rice).

Near the entrance, Tanner and Gentry Fields and their 9-week-old son Creager were enjoying release from the confines of home. And over at the far wall, 10 firefighters were gathered, sprung from the firehouse they shared as a second home.

There were fewer than usual tables, spaced widely apart, and the servers had bandanas to pull up over their faces if customers wished, but in all, it looked familiar and to customers and staff members alike, getting back to normal, even a “new” normal, was a palpable relief.

It’s a scene that played out all over the Valley in the last couple of weeks after Gov. Doug Ducey issued an order allowing limited in-house dining as of May 11. And it will continue in the ensuing month, as restaurants and brew pubs struggle to crawl back into the black after a financially bruising shutdown.

Patios like the ones at Huss, Stock & Stable, Clever Koi and The Vig have been especially popular with customers getting over cabin fever.

While some eateries remained partly open during the shutdown, offering takeout and delivery service, others closed completely, unable to devise a formula that allowed them to offer limited service and still make financial sense. Still others came up with creative ways to bridge the gap until they were able to welcome in-house diners.

Takeout worked especially well for Huss and other pubs, including North Mountain Brewing Co., which closed their kitchens but enjoyed a booming business in takeout from thirsty – and bored – shut-ins.

Los Sombreros, which reopened for dine-in service in May, came up with new menu items and specials for takeout and delivery through the closure, added a temporary drive-through and launched a margarita van and truck service. Like many local spots, it also helped the community, donating hundreds of burritos and bowls to families in need.

PHX Beer Co. pitched in as well, donating 123 pizzas to HonorHealth nurses, doctors and staff and offering a campaign in April that allowed customers to buy half-price pizzas for donation to hospitals.

Still others saw an opportunity in pop-up stores.

“Closing was really hard for us,” Chapman said. “We went from great business to a completely empty taproom.”

The Huss team knew it would need to be creative and nimble if it were to survive.

“We changed our business model on the fly,” Chapman said. “We did anything we could to stay afloat for those two months. We had curbside and back-alley pickup, and beer delivery. Then we developed a grocery provisions program. Anything that the grocery stores started selling out of, we started selling here. Baking supplies were especially popular. Everybody became a baker, so we sold flour, sugar, yeast, butter – everything for baking. The first day we opened the program we sold 75 pounds of flour in four hours.”

And the breweries kept making beer.

“People were drinking more because they were home more,” Chapman said. “Our brewers said the canning line hadn’t been that busy in nine months.”

Customer loyalty also has been key over the closure period.

“Our customers have been great,” Chapman said. “Over the last three years we’ve developed great regulars, and we would not have stayed afloat without them.”

While many eateries chose to open in-house service after May 11, even if on a limited basis, others opted to pass for a while to let things settle.

At press time, Yesenia Ramirez and her Salvadoreño team were limiting service to takeout and delivery.

“I wanted to wait a few weeks,” Ramirez said. “We feel more comfortable that way. We’re still selling takeout and delivery. It’s changing so quickly it’s hard to say what will happen.”

PHX Beer Co. planned to open its downtown taproom for in-house beverage service by June 1, while dining plans still were in the works.

At press time, plans still were uncertain for dining service in several North Central and downtown Phoenix locations. Customers should check websites or call for details.

Whatever date they chose, all the businesses contacted shared one common theme – they’d follow Centers for Disease Control and Prevention (CDC) guidelines. That meant a menu of preparations that includes strict sanitizing of tables, chairs and counters, before opening and between customers.

Many offered customers hand-sanitizers and masks. Staff wore masks – though not everyone at every establishment. Some took staff temperatures at the beginning of each shift. Paper menus were offered – and tossed after a single use. Touchless ordering and payment using customers’ cell phones was another option at several spots.

Bevvy Uptown was among several locations that took it up another notch, taking guests’ and team members’ temperatures. Angry Crab Shack is taking customer temperatures and serving food on tray tables, where guests are asked to remove their items themselves.

“I found a swimming pool noodle that was exactly 6 feet long and we used that to space out the chairs at the bar,” Berkner-Frogozo said. “We trained our employees using that noodle. Now there are only six chairs at the bar.”

Restaurant workers are used to constant cleaning, but the Coronavirus has taken things to a whole new level.

“We did so much work to try to get open,” Berkner-Frogozo said. “We sanitized the entire place, and we do that now after every customer. So far it’s been really well accepted by our patrons.”

For at least one North Central spot, Central Baking Company at 4727 N. Central Ave., it was business as usual through April and May.

“We’re considered an essential business,” said John Pagoto, co-owner of Central Baking Company. “We only had seating for eight so those were put away. People were looking for comfort food so that was a benefit for us.”

Pagoto credited customer loyalty for keeping his bakery and other local businesses afloat during the closure.

“I think that with all that we’ve been going through, this has brought the community together. I do believe that people are doing what they can to support their local, small businesses.

“The customers who came in said they wanted to do whatever they could for the local neighborhood businesses. Their loyalty really proved itself.”

Restaurant-goers have another option for re-visiting their favorites. The Arizona Restaurant Association has announced that Arizona Restaurant Weeks: Dine in or Take Out will take place June 19 to 28 and Sept. 18 to 27. The event will include dine-in, takeout and liquor-to-go options.

Participating restaurants will offer innovative dishes that showcase local chefs’ creative talents with three-course, prix-fixe menus for $33 or $44 per person. Wine pairings will be offered at some establishments for an additional cost. To learn more, visit azrestaurant.org.