It is Autism Awareness Month and National Donate Life Month, occasions near and dear to the hearts of a North Central Phoenix family. 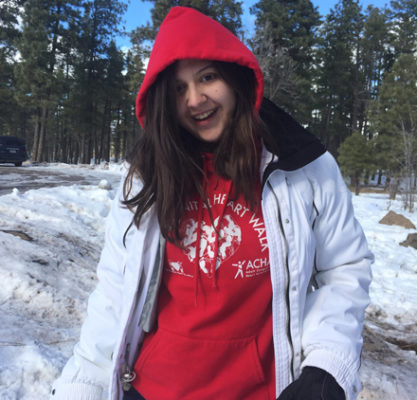 Kylee Geretti, who received a heart transplant at age 12 despite a doctor telling her parents she would not be eligible because of her autism, is thriving today (photo courtesy of Kandice Geretti).

Born in Phoenix, Kylee’s life took an unexpected turn in 2012 when she was 12 years old and came down with what seemed like a mild stomach bug. After a couple weeks of intermittent symptoms, her pediatrician referred her to Phoenix Children’s Hospital, where tests revealed she had dilated cardiomyopathy and would need very specialized care. After her diagnosis, Kylee experienced a rapid decline in her heart function.

As a nurse did compressions and preparations were made to put her on life support, doctors told Phillip and Kandice that Kylee would not be eligible for transplant because of her autism/special needs and it would be best to let her go. But Phillip and Kandice refused to give up on their beloved daughter, so against the doctor’s recommendation, they insisted that she be put on life support while they worked to get her on the transplant list. Over the course of her illness, she survived cardiac arrest, a stroke and a grand mal seizure, but in the face of all odds, Kylee received the heart transplant she needed.

After having to spend years in therapy relearning everything, Kylee graduated from North High School, beating the odds and offering hope to other families that have children with special needs who need transplants. Her “heartiversary” was in March and although her parents had planned to take her to an amusement park to celebrate this month, they had to cancel the trip due to the Coronavirus pandemic. Kylee is in the high-risk group for contracting the virus because transplant patients’ immune systems must be suppressed to avoid organ rejection, so she and her family have been staying home to keep her safe. In the past, the family has participated in heart, autism and donate life events.

“She’s just a ‘girl with autism’…who opened the door for other kids like her to have the opportunity to receive a life saving transplant,” Kandice said.