By Colleen Sparks
Local theaters and other entertainment venues and the artists that perform in them need support now more than ever as numerous shows have been canceled to protect patrons and artists from the spread of the Coronavirus. 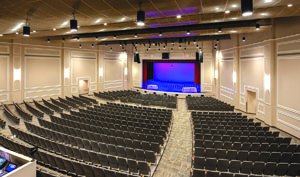 Some shows are being rescheduled, although in most cases ticket holders also may ask for refunds. Another option is to ask the theaters to keep the money spent on tickets as they likely will suffer financially due to the pandemic.

The Madison Center for the Arts at 5601 N. 16th St. has postponed its shows scheduled for April and also rescheduled the Madison Education Foundation’s Imagination 2020 NOLA Gala that was set for May 2; it has been moved to the fall. Southwest Shakespeare’s “Hudson” scheduled for April 9 to 25 also is being rescheduled, as is Mariachi Sol De Mexico, which had been planned for May 5.

The Phoenix Theatre Company, 1825 N. Central Ave., canceled all scheduled performances as of March 16 to help reduce the spread of COVID-19.

“We made this decision with your safety and wellbeing foremost in our minds,” says a message posted on the company’s website. “It marks the first time in our 100-year history that our theatre will pause performances. However, we know this decision is the right one for you, our patrons, and for everyone working on our productions. We remain unshaken in the belief that theatre brings out the best in us, inspiring hope and understanding. And with the help of steadfast patrons just like you, that mission will continue. We guarantee: the show will go on.”

The Phoenix Symphony, in light of the city of Phoenix closure of Symphony Hall, canceled all its performances through May 10.

Black Theatre Troupe has rescheduled its March and April performances of “SISTAS! THE MUSICAL” to May 15-31 at the Helen K. Mason Performing Arts Center at 1333 E. Washington St.

“Everyone at Black Theatre Troupe from our staff, board, volunteers and cast are sorry to have to take this step, but we are looking forward to gathering together after this crisis is over to celebrate,” said David Hemphill, executive director. “We are proud to be part of our wonderful community as we work together to get through this time, and we know this soon will pass. And then, we are most looking forward to seeing everyone and enjoying this uplifting production together.”

Valley Youth Theatre has canceled its second session of Spring Break Camp, its spring season of performing arts classes and its upcoming production of “Dear Edwina.” The organization at 525 N. First St. is monitoring the situation to decide if it will still offer its June production of “Peter Pan” and its summer camps. Those who bought tickets to “Dear Edwina” or who had paid for the cancelled camp or classes may get a 100-perecent credit towards future tickets or classes; a refund (minus fees) or they may donate to the theater’s future operating costs. Valley Youth Theatre is “determining ways to engage young performers, remotely,” according to Cozette Phifer, Valley Youth Theatre marketing and communications director.

Make donations to Valley Youth Theatre at vyt.com and make in-kind donations for future fundraisers by emailing the theater’s development director at development@vyt.com.

Phoenix Art Museum has closed its galleries, retail space, the Lemon Art Research Library and other physical spaces through April 6 but is offering free online gallery talks, lectures and virtual tours of the galleries. More digital content is available to the public. Check out the online gallery at phxart.org/art/art-collection.

Phoenix Art Museum members and Circles of Support members will have an additional month of membership added to their accounts to compensate for the decreased access. The art museum is continuing to pay its part-time and full-time employees.

“As a non-profit organization, closing the Museum will present a significant financial strain,” the museum website said. “If you are a Museum Member, a Circles of Support member, or simply committed to the arts in our community, we hope you might consider renewing your Membership early if you have the capacity to do so.”

Celebrity Theatre at 440 N. 3nd St. postponed its March and April shows and emailed ticket buyers the new dates when these performances will be held. All tickets bought will be honored on the new dates or people can ask for refunds or donate to the theater. Legendary singer Gladys Knight’s March performance at the theater has been moved to Oct. 9.

“In the priority interest of public safety, an abundance of caution and the well-being of our patrons, volunteers, artists, students and educators; and consistent with the response of other major performance venues locally and from coast to coast; The Nash is taking the measured response of suspending all performances and educational activities at The Nash, effective immediately through Friday, March 27, 2020,” according to a message on its website. “We will monitor the recommendations from government authorities and consider further action as necessary in the best interests of our community.”

Those with tickets to canceled events at The Nash may credit them toward future shows, obtain a full refund or convert them to tax-deductible donations in support of The Nash. Summer Jazz Workshops in May, June and July are still planned but watch for updates at thenash.org.

Church of the Beatitudes at 555 W. Glendale Ave. canceled a jazz concert in March and canceled an April 5 show. The April 5 show would have featured organist Paul Lee and vocalists Dr. Katherine Chacon, soprano, and Stephen Schermitzler, baritone, delivering music to accompany Cecil B. DeMille’s 1927 American silent epic film, “The King of Kings” in the newly renovated Worship Center. Watch for updates on the Beatitudes’ shows at facebook.com/pg/BeatitudesChurch/events or at beatitudeschurch.org.

The Japanese Friendship Garden of Phoenix in order to protect guests, volunteers and staff members, canceled all events and workshops until April 1. The garden at 1125 N. 3rd Ave. is still open for general admission during its usual hours. To learn more, visit japanesefriendshipgarden.org.

The Alliance for AZ Nonprofits has created an Emergency Relief Fund, which will allow those who give on Arizona Gives Day, Tuesday, April 7, to help nonprofit organizations. Make contributions at azgives.org/relieffund. A survey by the alliance revealed that more than 83-percent of Arizona non-profits expected to be negatively impacted by the spread of COVID-19.

JALT Media sponsored a project organized by Seth Tucker in which Arizona’s professional theater performers, sang songs to raise money as part of the Live! Garage Concert. Supporters chose songs or partners they wanted to sponsor and donated a minimum of $5 on Venmo. Then the artists performed in Tucker’s garage, with 6-feet between each other in live broadcasts.