By Colleen Sparks
After the recent anti-Semitic attacks on the East Coast, The Jewish Ensemble Theatre will shed light on the importance of preventing discrimination and violence against anyone when it takes the stage for the first time in Phoenix. 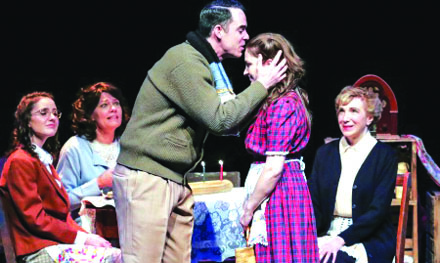 The theater company will be in the Valley to perform “The Diary of Anne Frank” at 7:30 p.m. on Thursday, Feb. 13, at Madison Center for the Arts at 5601 N. 16th St. This vivid production reveals the horrors of the Holocaust and genocide through the eyes of a Jewish girl, who must hide with her family and others in order to try to avoid getting captured by the Nazis.

A cast of 16 actors will perform the play and as they do in other theaters, the actors will talk to students who are in the audience after the shows in Madison Center.

“It’s the first time we’re taking ‘Diary’ on the road and we’re very excited and so pleased that the reception has been as strong as it has,” said Christopher Bremer, executive director of the Jewish Ensemble Theatre. “The teachers realize that this is an extremely important message that we have to make sure the young people understand. The anti-Semitism that’s pervasive, it’s horrifying. The truth is there’s all kinds of marginalization of people who aren’t the norm. Now more than ever we have to call out man’s inhumanity to man.”

The Jewish Ensemble Theatre has been performing “The Diary of Anne Frank” for 25-plus years, reaching more than 100,000 children. Youths in local schools and others with limited budgets will be able to see the play thanks to the Jewish Community Foundation of Metropolitan Phoenix making a donation to the theater so ticket prices can remain affordable, Bremer said. A board member for the Jewish Ensemble Theatre spends winters in Phoenix, which prompted the plans to bring the show to the stage locally.

If you would like to arrange for your school’s students to see the play, call the Madison Center for the Arts at 602-664-7777. For tickets for the general public show, visit themadison.org.