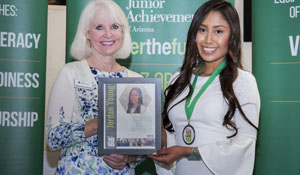 The Phoenix Union High School District, which includes 20 schools and more than 27,000 students, has its share of outstanding young men and women who achieve academic success and recognition, bringing in millions of dollars in scholarship offers from around the country each year (the class of 2018 earned scholarships totaling $102 million, a new district record).

However, two young women stood out among their 5,000-plus graduating peers as they said their final goodbyes to the district in May of this year.

Central’s High’s Jordan Young was selected as a 2019 Junior Achievement 18 Under 18. This program “showcases the state’s up-and-comers who show exceptional entrepreneurial spirit, leadership, community service, and an overall extraordinary skillset,” according to Junior Achievement. Recipients were recognized at a breakfast event in Tempe on April 13.

As Young grew up in the Navajo Nation, near Four Corners, she watched as her father, a bull rider, was frequently injured. She realized the challenges that lower income and rural families face with health issues.

Now she’s a voting board member (and the only youth member) of Mountain Park Health Center, a nonprofit health organization that provides healthcare to people regardless of their financial status.

At Central High, she ran track and recruited more classmates to participate. She also helped to boost a sports medicine group at the school.

Young is honing her skill at being a patient advocate. She’s not sure which area of medicine she wants to pursue for a career—she’s considering being an orthopedic surgeon—but one thing is certain: She wants to make sure that when she’s the physician, patients and their families will feel confident that they’re being well cared for.

Young received scholarship offers worth $665,000 and narrowed her choices to Yale and Dartmouth. Both scholarships are worth approximately $275,000 over four years.

She also was one of only two students this year to receive the Jason Savala Scholarship, presented by the Phoenix Union Native American Education Program during its 20th Annual Graduation Ceremony on May 11. One-hundred-twenty Native American students from 15 schools were honored with dinner and a reception.

Savala was a former Native American advisor for PUHSD and a security guard at Maryvale who was fatally injured in a hit-and-run accident last year.

Bailey Benson was in the International Baccalaureate (IB) Diploma program at North High School. Besides her rigorous IB courses, she was the lead intern and researcher in the Farm @ South Mountain Community College Aquaponics Case Study, and through the SMCC Junior ACE program, she earned a certificate in Entrepreneurship, focusing on the combined art of storytelling with business to create pitches and make complex ideas appealing to the general population.

Benson also was the head of the Food Committee in the Arizona Science Center Teen Advisory Board, authored a book to spread awareness of food insecurity in Phoenix, and attended Yale Young Global Leaders-Sustainable Development and Social Entrepreneurship—an academic and leadership enrichment program.

Benson’s high school GPA was 4.9, and she was ranked third in her senior class. Before she graduated, Benson was selected as a Morehead-Cain Scholar at the University of North Carolina-Chapel Hill. The Morehead-Cain Scholarship is the oldest merit-based and one of the most prestigious scholarships in the country, with fewer than 4 percent of candidates becoming members of the Class of 2023.

Benson plans to double major in Environmental Studies and Economics. She took six science classes in high school to prepare for engineering in college.  She hopes to become an investment banker to help struggling communities create self-sustainable economies.