WHS’ Educators Rising chapter lauded
Washington High School’s Educators Rising students recently competed in the Educators Rising 2019 State Leadership Conference in Tucson, and had five state champs, five-second place winners, and three third-place finishers. This is the sixth year in a row that WHS had more state champions than any other chapter in Arizona.

Eleven WHS students qualified for nationals and will compete in 10 of the 18 national competitions. For the fifth year in a row, WHS was named a Gold level chapter, which is the highest level of achievement in the Educators Rising program.

Cain nominated for presidential scholarship
Sunnyslope High senior Miranda Cain is one of five Arizona students who were nominated for the Career and Technical Education Presidential Scholarship. She will find out in May whether she won the honor of a free trip to Washington, D.C., where winners will be celebrated in a ceremony, given a pin, and will also meet the president.

Enjoy programs like Project SHARP and High School 101 or explore new subjects such as culinary, fire and law, coding, engineering and robotics, honors algebra and honors geometry. Programs to recover deficient credits also will be available.

Free transportation is provided for most classes, and breakfast and lunch also will be available.

Many of these free programs are offered on one of the district’s nine high school campuses, while other courses can be accessed online. Details and registration information are coming soon on the district website at www.guhsdaz.org. To register now, visit: https://bit.ly/2XY4VEH.

Heights focuses on language Immersion
In the new workforce, it is becoming increasingly important to be bilingual or speak multiple languages. Madison Heights Elementary School is working to give students a head start on a second language through its Spanish Immersion program.

Students from kindergarten through fourth grade participate in the 50/50 Spanish immersion program. Science, social studies, and language arts are taught exclusively in Spanish, while reading, writing, and math are presented in English. Teachers work in teams so that the students only interact with a teacher in a single language.

The school is accepting applications for the 2019-2020 school year. For more information or to schedule a tour, visit https://madisonaz.org/enrollment.

Marcus enjoys math, spelling, and science. Outside of school, he plays the piano and mobile games with friends. Pragya likes to read, craft, draw, and color. Her favorite sports are gymnastics and dancing. Her favorite subject is history and she likes to learn about animals.

The AEF Arizona Spelling Bee began in December when schools throughout the state held qualifying bees. Winners progressed to district bees in January and then county and regional bees in February. The top speller that day will go on to represent Arizona in the Scripps National Spelling Bee in Washington, D.C., in May. Visit www.azedfoundation.org for results from the Arizona State Bee.

Solano builds partnerships with community groups
Solano School has partnered with Janelle Wood and the Black Mothers Forum to lead a community conversation with parents and students of their school’s African American community. Part of the Mission of the Black Mothers Forum says that they “believe that all children regardless of color, origin, or background have opportunities to fulfill their dreams and preservation of their lives.”

Sixth graders prepare for JA BizTown visit
Longview School sixth-grade students learn all about the working world in their studies and preparation to attend JA BizTown. BizTown combines in-class learning with a daylong visit to a simulated town. In the process students learn about the world of employment, job preparation, how to perform tasks, manage a budget, and cast votes for elected positions.

Students recently had the chance to spend a morning interviewing for their jobs in preparation for the visit. In the process, the students were able to reflect on their leadership skills, roles they play within a team, how creativity aides thinking skills, and what skills or attributes they may need to focus on in their future to reach goals.

Only 10 percent of the Army JROTC units in the country earn Honor Unit with Distinction. PUHSD has 1,730 student cadets at 10 school programs.

This all-day accreditation inspection is student-based with all the briefings, inspections, interviews and reviews student-led. It is conducted every three years. The U.S. Army representatives inspected several areas, cadet battalion staff presented two formal staff briefings and JROTC classes received a formal uniform inspection and had to perform a prearranged platoon drill marching sequence. This inspection is part of the national U.S. Army JROTC AdvancEd certification.

Students receive new tap shoes
Students in Lekeisha Weimerskirch’s tap program at Sunnyslope School, 245 E. Mountain View Road, were surprised with new tap shoes, socks and even some stuffed animals on Feb. 19 thanks to a local children’s theater group and its generous partners. 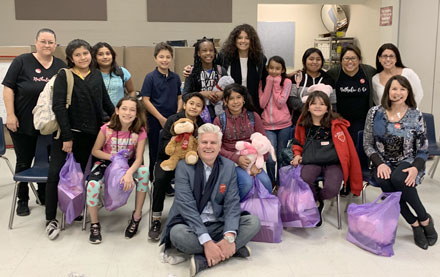 Valley Youth Theatre’s Producing Artistic Director, Bobb Cooper, was forwarded a story link about children in a local school district having to hot glue quarters to old shoes in order to learn and enjoy the art of tap dancing. It touched his heart and he wanted to help make a difference.

He called Nathalie Velasquez, of Nathalie & Co. Dancewear and Little Things, and asked her to sell tap shoes at cost, as well as Glenda Gutierrez, who runs OMG Foundation, a local nonprofit organization that funded the purchase of the shoes.

Cooper was joined by Velasquez and Gutierrez at the surprise presentation, where the students received the brand-new shoes—not hand-me-downs—that will be the children’s very own.

Weimerskirch is the 21st Century program site coordinator and After School Academy coordinator at Sunnyslope School. Currently there are more than 40 students in the after-school tap program.

The season for both teams culminated with the CYAA Tournament, which was a double-elimination format. Both SFX teams took home first place. 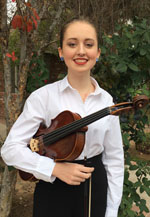 Small currently is a freshman at Arizona School for the Arts (ASA), where she plays viola in the chamber orchestra. She has been studying viola for five years and is principal violist for the Symphonette Orchestra of the Phoenix Youth Symphony.

At ASA, she is a member of Model United Nations, and also studies choir and piano. As a Cadette member of the Arizona Cactus Pine Girl Scouts, she has earned both the Bronze and Silver Award.

Interlochen Arts Camp attracts students, faculty and staff from all 50 U.S. states and more than 40 countries.

Schools honored with the AP Computer Science Female Diversity Award have expanded girls’ access in AP Computer Science courses. Out of more than 18,000 secondary schools worldwide that offer AP courses, Xavier College Prep is one of only 685 to accomplish this.