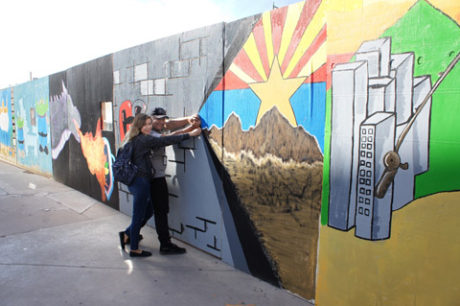 Central High School seniors Jocelyn Herrera and Jonathan Cabañas Rodriguez pose in front of one of the more than two dozen “murals” painted by students on the barrier wall surrounding the construction of the new cafeteria expansion (photo by Teri Carnicelli).

Central High School’s modernization project is nearing the halfway point, with completion scheduled for the end of March.

The $9 million renovation includes the modernization of the school’s cafeteria, adding approximately 6,000 square feet; expanding the school’s popular Culinary Program with the addition of a new demonstration area and culinary lab space; and significantly renovating the front entry of the campus, which is prominently located on Central Avenue, with a more welcoming look. Besides the improved curb appeal, the administration building will also feature a new lobby entrance to the school and new, more secure registration area.

“The administration building had no front door, and no image that could define Central High School,” said PUHSD Superintendent Chad Geston.“It will have a controlled access lobby for safety, but it will present an image to the community that stands out.”

Built in 1958, Central High is home to 2,071 students and remains in operation during the renovation project. The project was funded by a bond measure that was approved in the November 2017 election to fund district facility improvements.

During the construction project, the cafeteria building, envisioned as a “Student Union,” is being be bordered by a mural fence painted by Central High students, intended to provide Instagram backdrops and giving students a fun way to mark this highly anticipated campus modernization. Until it’s completed, a large tent on the outside basketball courts is the temporary cafeteria.

“High school becomes your second home, and the Student Union will be a place to have fun. It will be a landmark and the heart of the campus,” said Central High student Roberto Lemus, who spoke at the Oct. 23 groundbreaking.

“Central High School will feel more like a college campus, and it will provide the space to connect people to one another,” said Principal Leticia Avalos. “In addition, our Culinary Arts Program will continue to thrive as a result of the modernization project.”

Culinary Arts teacher Erin Sullivan’s program already has 284 students in 10 different classes, including a practicum that offers a Serv-Safe national certification. With a commercial kitchen, she sees an expansion of the program, and more catering opportunities.

McCarthy Building Companies was selected as the general contractor for the renovation project and Orcutt Winslow is the architect.

“Our teachers are incredibly enthusiastic about the future of the campus,” Avalos said. “This is an exciting time to be a Bobcat.”