A gymnastics coach for more than four decades is getting his time in the spotlight. Dan Witenstein, co-owner and team director of Arizona Sunrays Gymnastics & Dance Centers, recently was inducted into the Arizona Gymnastics Hall of Fame at the USA Gymnastics State Awards Banquet.

Witenstein, who has coached and guided hundreds of the top female gymnasts in Arizona, got his turn to shine after watching his athletes over the years get many awards, medals, trophies and full-ride collegiate scholarships. 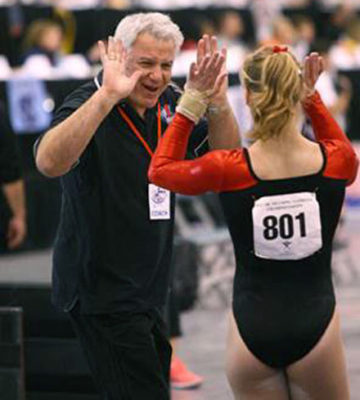 Dan Witenstein, a gymnastics coach for more than four decades, has seen his gymnasts win medals, trophies and other awards over the years. Recently, he received his own recognition: being inducted into the Arizona Gymnastics Hall of Fame (submitted photo).

Witenstein’s friend, co-worker and fellow Hall of Fame member Pam Evans inducted him at the awards banquet at Greyhawk Golf Club in Scottsdale, saying he has the utmost respect among his peers. In addition, she shared words of praise from some of Witenstein’s former gymnasts. One such gymnast, Kristin Fanning, who is now the head coach at Gold Medal Gymnastics in Chandler, said Witenstein offered “a safe place for all of us to grow up in.” Fanning added that Witenstein ensured she and the other students learned not just about gymnastics but also about honesty and integrity.

Evans also praised Witenstein and his wife, Julie, for giving back to the community.

Originally from Maryland, Witenstein was a collegiate gymnast who competed for three years for Arizona State University and later became assistant coach for the ASU women’s team from 1980 to 1985. While he was working as the assistant coach, the ASU women’s gymnastics team placed among the top six in the country every year, including scoring a second-place national finish in 1983.

In 1990, the Witensteins decided to open a gymnastics school. The couple bought Sunland Gymnastics & Dance in Phoenix and changed the business name to Arizona Sunrays. Their goal has been to create the highest quality programs for children. More than 2,000 students are enrolled in Sunrays’ two locations, at 3923 E. Indian School Road and 15801 N. 32nd St.

When Witenstein accepted his award he thanked the children he said he was “privileged to coach” and talked about the many special moments he had shared with them, including seeing the American flag raised after they won gold medals and watching them win the Jr. Olympic National Championships.