Home / Healthy Living / Street renamed in honor of ‘The Champ’

Street renamed in honor of ‘The Champ’ 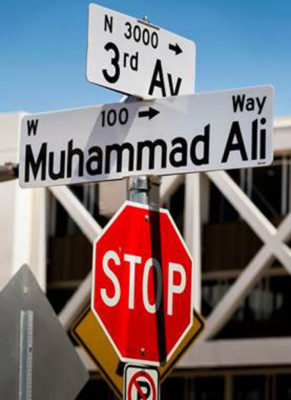 The former West Merrell Street in Phoenix was renamed in June in honor of legendary boxer Muhammad Ali (submitted photo).

A street on the Dignity Health St. Joseph’s Hospital and Medical Center campus, which houses Barrow Neurological Institute’s Muhammad Ali Parkinson Center, was renamed for Muhammad Ali on June 3. The street honors the Champ’s enduring legacy as the face of the fight against Parkinson’s disease.

The day marked the third anniversary of Ali’s death in Phoenix at age 74. The City of Phoenix also proclaimed June 3 “Muhammad Ali Day” in honor of all that he did for his adopted hometown.