By Colleen Sparks
Developers are getting new life out of aging office buildings in the area, renovating and redesigning them to create modern, luxury apartments, hotel rooms and innovative workspaces. They say the transformed buildings will meet the needs and desires of people in North Central Phoenix and tourists, who like walking to restaurants and stores and taking the light rail to entertainment venues and jobs. 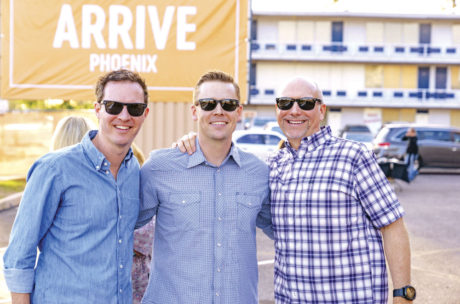 One such project is at 400 and 444 W. Camelback Road. The development is a partnership among Vintage Partners, a multi-disciplined real estate development company; Venue Projects, a Phoenix redevelopment practice that focuses on adaptive reuse projects; and ARRIVE Hotels, a national hotel chain. Two buildings on the site that had been used for offices are being turned into the main part of ARRIVE Phoenix, a new ARRIVE Hotels location. Three additional, one-story buildings are being constructed between the two mid-century towers and will house a popsicle stand, pool, a pool bar/restaurant and Cartel Coffee shop.

The businesses are expected to open Nov. 1. Walter Crutchfield, partner with Vintage Partners, grew up in North Central Phoenix and is thrilled to rejuvenate the buildings, which were constructed in the late 1950s.

“The city of Phoenix is very helpful for adaptive reuse because they don’t want to see our historical buildings being torn down,” Crutchfield said. “A project like this preserves the buildings, gives them a new use and a new life. I went to Royal Palm Elementary with my wife of 38 years. It’s the core of our lives and our family.”

In North Central Phoenix, 18 different adaptive reuse projects have qualified for funding through the city of Phoenix’s Adaptive Reuse Program within the last 26 months, Sam McAllen, economic development program manager for the city said. The city program provides development guidance, streamlined processes, a decreased timeframe and cost savings to those who adapt older buildings for new businesses if they meet several criteria.

ARRIVE Hotels, based in Los Angeles, will have a 79-room hotel on West Camelback Road with great amenities at affordable prices, Crutchfield said. It will house a cocktail bar called Don Woods Say When with a 1960s, “Mad Men” TV show-style ambiance and the original neon sign for Don Woods real estate investments.

Rick Mountjoy, chairman of the Traffic Committee for the Medlock Place Neighborhood Association, said he and his neighbors favor developments “conducive to establishing a walkable urban community” and ARRIVE Phoenix will do that.

“We’ve pretty much said to them, ‘if you mitigate the traffic you’re going to cause and prevent it from getting into the neighborhood, particularly on 3rd Avenue, we’re okay,” Mountjoy said.

Ellen Bilbrey, president of the Medlock Place Neighborhood Association board of directors, agreed.

Not far from there, another adaptive reuse project is underway. The high-rise One Camelback at 1 E. Camelback Road houses BMO Harris Bank and will be converted into luxury apartments with two to three restaurants on the first floor. The building just east of Central Avenue, built in 1985, will have 163 units in studio, as well as one, two, three-bedroom and penthouse styles. BMO Harris will remain on the first floor.

Dale Phillips, president and founder of Stellar Residential, said his company plans to make the building “more functional and marketable.” One Camelback will have a rooftop pool and rooftop yoga classes, as well as a fitness center and pet wash. It is estimated the businesses will open in 2021.

The Orchard, a two-acre site where Luci’s at the Orchard, Pomelo restaurant and Splurge Ice Cream & Candy Shop are located, on North 12th Street just north of Glendale Avenue, is another adaptive reuse development. A homestead, another house, as well as a plant and tree nursery and orchards used to be on the site and the original houses were renovated, said Lucia Schnitzer, who owns the three businesses along with her husband, Ken Schnitzer and Jerry Mansoor.

Curt Kremer, managing partner with George Oliver, LLC, said he and co-owner of the company Charles Jerkovich like the Spanish architecture but will add a fitness center, meditation room, yoga room and two-story patio with covered patio space where food trucks can park. A Kaleidoscope Juice café will open inside the building .

“The traditional office of yesterday doesn’t fit the demand for today’s users,” Kremer said. “The type of population we’re trying to attract to the building is getting younger and younger.”

CASA will feature two large courtyards with outdoor seating and free Wi-Fi, as well as indoor training and conference rooms. The renovations will probably be done in November.