By Marjorie Rice
Ask most Arizonans to conjure up their favorite Mexican food and it probably will go like this: A fat chimichanga or enchilada, paired with a couple of tacos, on a plate with refried beans, rice, a pile of shredded iceberg lettuce and some chopped tomato. With guacamole or sour cream. Or both. 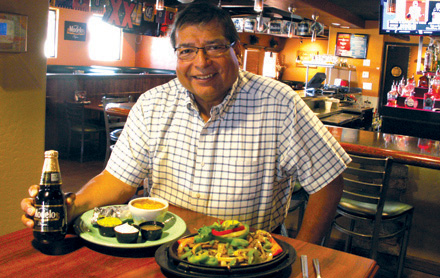 John Salazar, whose family has operated Manuel’s restaurants for 56 years, sits in front of a sizzling serving of beef fajitas. The family-owned restaurant chain has seven locations around the Valley, including one at 2820 E. Indian School Road (Photo by Marjorie Rice).

Nothing trendy, just good Mexican food like we’ve been wolfing down here in the Valley for decades.

It’s what Manuel’s has been dishing up for 56 years and if John Salazar has his way, the family-owned chain will be doing the same 55 years from now.

John is the eldest of founders Manuel and Alice Salazar’s four children. Manuel and Alice opened their first location in 1964, at 32nd Street and Indian School Road. They began to expand in 1979 and today, there are seven locations across the Valley, all owned and operated by John and his siblings.

“We expand slowly,” John Salazar said. “Mostly, we grow with the size of the family. My son runs the Tempe store and my brother’s son runs Goodyear. Right now the family is still growing, and we’re waiting for the younger ones to get bigger and see what they want to do.”

That family tradition runs to the staff as well.

“We’ve been really blessed,” John said. “Some of our employees are retired after working with us all their lives. The average employee has been here 20 years, and we’re going on the second generation with some of them.”

The same goes for their customers, going on the third generation. And the Salazars are counting on the fourth, offering free dining for kids on Wednesdays. (The offer covers one child age 12 years old and under per adult, ordering from the kids’ menu).

What keeps them coming back is another combo – consistently good food, friendly service and a welcoming family-friendly atmosphere, John said.

“There are a lot of restaurants that are coming in that do Mexican style, but our customers especially are used to traditional Mexican food – tacos, enchiladas, tostadas, chimichangas – that’s the staple that customers always want,” he said. “We’ve had those for a million years and we’ll never change.”

The menu will feature trendy food from time to time, he said, “and we might bring something seasonal, but the basics are still the mainstay.”

“Our customers come in expecting a certain thing,” John said. “It has to be there, and it has to be the same way it was the last time and the time before that, and the way their parents – even their grandparents – got it.”

Combination dinners are in the $12 and $13 range; dinner specialties including seafood enchiladas, carne machaca, fish tacos and the like ranging from $13 to $18.

“We have some of the best,” John said. “We use an inside skirt steak, and we had to travel all the way to Houston to find a beef packer. We worked with them many months to get it perfect. We have great chicken fajitas, too.”

Pollo Especial – chicken chunks and chiles wrapped in a flour tortilla, deep-fried and covered with green sauce, cheese and jalapeno cream cheese sauce for $15 – is another customer favorite.

“We’re more than just a restaurant, we’re party central,” John said. “We do off-site catering and even more than that, we do drop-off, where you can order casseroles and party trays at a very reasonable price.”

Over so many years, Manuel’s also has developed close connections with the communities it serves.

“That’s a mainstay for us,” John said. “We want to be community-focused, and it means more than giving money.”

Tradition, consistently good food and service and community outreach – it’s a combination that has served the Salazar family and their customers well, and they’re determined to carry on that tradition for decades to come.