Good things come to those who wait at Little Miss BBQ

By Marjorie Rice
It’s 11 a.m. on a hot summer Friday and a long line of salivating customers is snaking its way around the patio at Little Miss BBQ in Sunnyslope. Finally, the doors open and a waft of air redolent with smoke and spices washes over the lucky first in line.

An open cooking area reveals the 1,000-gallon offset smokers where racks circulate through the hot smoke from a combination of olive, pecan and oak. 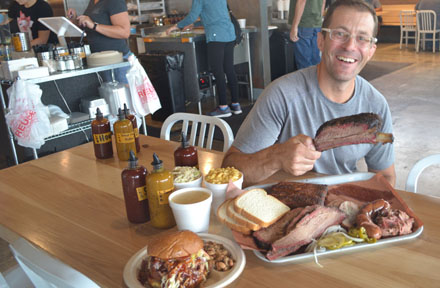 Scott Holmes shows off some of the many hearty meals available at Little Miss BBQ in Sunnyslope. He and his wife, Bekke Holmes, opened the location at Seventh Street south of Dunlap Avenue after launching a location near Tempe in 2014 (photo by Colleen Sparks).

At the counter, a happy team of cutters and servers greets the salivating throng, slicing succulent brisket (fatty and lean), pork ribs, sausages and turkey; wrangling enormous, meaty beef ribs; piling pulled pork or chopped brisket onto sturdy Hawaiian sandwich buns from Noble Bakery. The meat is sold by the pound (brisket goes for $20.50; pork spare ribs $17) or in combo plates ($14 for the sliced brisket plate, including two sides; $10.50 for the popular Jefe sandwich, a tower of three meats, slaw and a side).

Nothing is cut in advance, one reason for the line, and when the day’s batch is gone, there is no more. (“I won’t sell reheated barbecue,” owner Scott Holmes said. “It just doesn’t have the same quality.”)

Down the line, servers add ranch beans (home-style, with scraps of meat from the cutting boards stirred in), potato salad, slaw, creamy jalapeno grits and mac and cheese. Go for the grits. You won’t be sorry.

The line inches forward as diners carry their plates to a side area to pile on pickles, sliced jalapenos, onions and white bread, then to tables where at last they can feast, drizzling barbecue sauce – three to choose from including regular, spicy and a tangy mustard – over the fragrant, fork-tender meat and washing it down with a beer from the bar.

It’s a scene straight out of hill country Texas, though spiffed up a bit in this new (since last November) location for Scott and Bekke Holmes.

The Sunnyslope restaurant, at Seventh Street just south of Dunlap, is the second Little Miss BBQ. The original, near Tempe opened in 2014 in a scruffy industrial area just south of the airport. It’s still there, attracting customers from all over the country who are willing to brave lines legendary for their length (we’re talking hours).

Why Sunnyslope? “I live three minutes south of here,” Scott said. “I drove by and noticed the waffle ceiling and loved it. We’d just had another real estate deal go south and this seemed like a great location.”

Scott’s journey to barbecue took a few turns before Little Miss BBQ. He went to Scottsdale Culinary Institute in the ’90s and worked in a Cuban café. He loved to cook but hated the job so tried a variety of others, including the mortgage business, stocks and construction. Scott said the barbecue bug hit when he and Bekke went to her home state of Texas for a friend’s wedding.

“Bekke’s parents picked us up at the airport,” Scott said. “Her dad had a cooler filled with beer and said, ‘We’re going to the Salt Lick,’ I had no idea what it was.”

What it was is a legendary BBQ spot in Driftwood, in the hill country outside Austin, where patrons line up for some of the best BBQ in the state. It’s BYO, thus the cooler of beer. The vibe is friendly, with lots of trading of food and sharing drinks.

Scott, Bekke and later a family friend, decided to try barbecue competitions, honing their skills over the months. They named their team Little Miss (their dog’s nickname). That morphed into the original Little Miss BBQ. Their reputation – for the quality of their food and the offset smoker designs they perfected – grew quickly among a national network of barbecue fans.

Scott and Bekke, along with partner John Rippel, have branched out into the barbecue smoker business and their Camelback Smokers are sold nationwide. These are for serious cooks – the smallest is a 120-gallon model and costs about $4,500. A smaller home version is in the works.

The design is the result of years of tweaking, an approach Scott brings to his Sunnyslope restaurant as well.

Some alterations are in the works, for one thing to cut down on the substantial noise. And he’s planning to update the smoker area.

But some things won’t change.

“There are basic things we try to do each day,” Scott said. “We try to cook the best barbecue that we know how. And we try to have a great experience for people, a great atmosphere, welcoming you and treating you as if you’re family or a friend. It’s about trying to instill that sense of community with everybody.”