Many residents of the Sunnyslope community are pushing for improvements in residents’ experiences using the free SMART Circulator.

Over the last several months, 17 members of Sunnyslope worked as the voice of their community on the “Access Sunnyslope” project alongside the Maricopa County Department of Public Health (MCDPH). The focus of the project was to identify ways to boost residents’ experiences using the free SMART Circulator bus to access low-cost and free resources for food, care and places to be active. The community members involved in this project, called “Resident Ambassadors,” recently finished orientation and training on how to assess the walking environment and conducted several field trips using the Circulator bus. 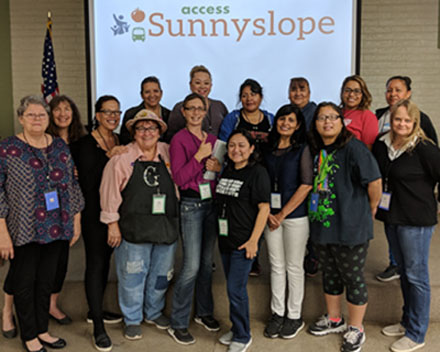 Resident Ambassadors, who live in Sunnyslope, worked as the voice of their community on the “Access Sunnyslope” project alongside the Maricopa County Department of Public Health (MCDPH). They focused on finding ways to improve residents’ experiences using the free SMART Circulator bus to access low-cost and free resources (photo by John Trevino).

At a recent capstone event, the results of the Resident Ambassadors’ walkability and field trip reviews were revealed. The group said there were five areas of concern: speeding and traffic calming issues, pedestrian crossings, sidewalks and walking areas, shade, and neighborhood stewardship. Resident Ambassadors said the issues they saw created barriers for many residents in using the SMART Circulator. For example, not having proper shade can make it difficult for many people to stand in the heat of summer while waiting for the bus. Creating safe places for people to walk and cross the streets is also important to the group.

Besides the walkability study, a community survey was conducted at various sites in Sunnyslope and online through the Nextdoor app. The community survey revealed several areas of concern that aligned with what the Resident Ambassadors discovered. Some areas survey respondents said needed the most attention were the addition of street signs and bike racks and a change to the Circulator route. Out of the survey respondents, 70-percent said in order to improve their community, trees and shade were needed most, followed by streetlights and sidewalks. The survey noted most riders use the Circulator to run errands and visit health services and community sites, including places to eat.

The City of Phoenix and Valley Metro have been “very open” to considering the changes to the SMART Circulator route, said Julie Scholer, Community Health Innovations supervisor for the Maricopa County Department of Public Health. Serious consideration has been given to adding a bus stop at Mountain View Park so residents could easily access the park and community garden, Scholer said. The county health department has continued working with the Resident Ambassadors on other projects in Sunnyslope including doing audits to assess the amenities, resources and conditions of parks.