By Colleen Sparks
Geodesic dome homes, Dutch-inspired single-family houses and a bank property on which a teenager used to raise pigeons are among the quirky landmarks a magazine is featuring in a special issue on Sunnyslope.

The stories of people and businesses that shaped the area are the subject of Arizona Contractor & Community magazine’s fall issue, released Sept. 1. The last special issue on Sunnyslope the magazine published was in 2017. 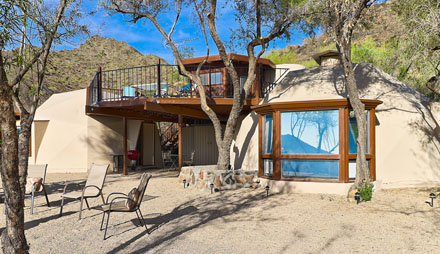 “There’s so many good stories about this community,” said Douglas Towne, editor of Arizona Contractor & Community magazine. “We have a host of interesting articles for our readers.”

The issue features The Sunnyslope Domes, three structures that two Arizona State University professors built in 1970 where Hatcher Road deadends into the Phoenix Mountain Preserve. Now husband-and-wife team Patrick and Lisa Harvey rent the two geodesic domes and a central tower through Airbnb. Patrick, an associate broker with West USA Realty, and Lisa, a Realtor with West USA Realty, made some minor upgrades to the buildings but they have kept much of the original look. Towne said the domes look similar to the insides of golf balls and offer “wonderful views of Sunnyslope.”

The magazine also explored the rich history of what is now called HonorHealth Desert Mission. In the 1920s people from other parts of the country moved to Phoenix hoping to find cures for tuberculosis and other health issues. Many of them were financially strapped and lived in tents and shacks. The local Presbyterian Church’s Desert Mission learned about their struggles and volunteers brought them food and medical supplies. In 1927 Desert Mission formed as a nonprofit organization and built cottages between Central Avenue and 7th Street for people who were ill.

In 1931, Ohio entrepreneur and businessman John Cromwell Lincoln brought his wife, Helen, to Phoenix to recover from tuberculosis and the two began supporting Desert Mission. Later the couple contributed much of the money needed to buy the current HonorHealth John C. Lincoln Medical Center at 250 E. Dunlap Ave.

The issue also highlights a 1963 space-age-themed groundbreaking for what was then Guaranty Bank at the southeast corner of 7th Street and Puget Avenue. A teenager at Sunnyslope High School had been raising pigeons out of a shack on the land to raise money so Guaranty Bank moved the shack to his parents’ home. Now a Wells Fargo Bank is on the site.

Arizona Contractor & Community magazine also shared the story of an unusual housing development. The Dutch Village was a single-family home community built in the late 1950s at the southeast corner of 19th and Dunlap avenues. The houses were designed to look like Dutch homes and people would receive tulip bulbs just for visiting the community.

The issue of Arizona Contractor & Community magazine is available for $5.99 at Books bookstore, 9201 N. 7th Ave., or online at www.arizcc.com.