New commander moved up the ranks

When Phoenix Police Commander Aimee Smith began working for the city more than 20 years ago, she knew she liked helping residents but had not envisioned a career in law enforcement. 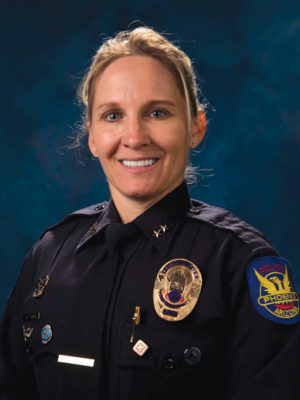 Aimee Smith, the new commander of the Phoenix Police Department’s Desert Horizon Precinct, has served the department for 22 years (photo by phoenix.gov).

Smith earned a bachelor’s degree in leisure studies from Northeastern Illinois University and began working at a local YMCA. She decided to move to Arizona when her sister enrolled in a doctoral program at Arizona State University. Smith, now 46, transferred to a YMCA in the Valley and then got a job working in the Parks and Recreation Department for the City of Phoenix. She said while working in the city department, she interacted with police officers that said her “great demeanor” and skills working with residents would make her an ideal police officer.

“I did a ride-along and I was sold,” Smith said.

She is thrilled to return to the Desert Horizon Precinct, where she served as the Neighborhood Enforcement Team sergeant from 2011 to 2014.

“The diversity of the precinct is really what’s exciting to me,” Smith said. “I’m a proponent of living in Phoenix. I feel like it’s my city. I really look forward to meeting more members in the community. I’m super happy to be here.”

After working in the Central City Precinct downtown as an officer from 1997 to 2001, Smith became an undercover detective for the Drug Enforcement Bureau. She worked undercover posing as a drug dealer during drug sales.

Smith recalled one scary incident where she was posing as someone buying drugs from a suspect and he locked the door behind her and said he had heard she was a police officer. She kept her cool and talked him out of thinking she was a cop. Smith also worked as a training detective and Arizona Financial Crimes Task Force agent with the Drug Enforcement Bureau.

In 2009 Smith was assigned to work as a patrol sergeant for the Desert Horizon Precinct, which now covers nearly 75 square miles with a population of more than 300,000 residents. She was impressed by the residents’ strong community involvement and support of police, including the active Block Watches and neighborhood associations. After being transferred to another precinct, Smith moved back to the Desert Horizon Precinct as a Neighborhood Enforcement Team (NET) sergeant in 2011.

In 2017 Smith was chosen to represent the Phoenix Police Department at the FBI National Academy for a leadership program in Quantico, Virginia. She then was assigned to the department’s Communications Bureau, where she was appointed commander in 2018 and served until her current promotion.

Desert Horizon Precinct Resource Lieutenant Chas Clements has worked with Smith a long time and said she is a great boss.

“She’s very knowledgeable because of all the different places that she’s been,” Clements said. “She’s very approachable; which is a positive. She has an open door policy. Anybody can walk into her office and talk to her.”