By Colleen Sparks
The North Central Phoenix Homeowners Association (NCPHA) is marking a small victory after recommendations that a home built in 1926 should receive historic designation, but the issue is far from resolved. 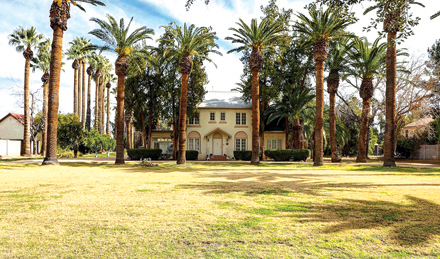 If the house were to be listed on the Phoenix Historic Property Register, it would provide a new zoning overlay that would protect the house from significant changes, including demolition.

Community members and the NCPHA have protested a possible demolition of the house. Anne Ender, NCPHA president, was pleased with the commission’s decision.

“It’s encouraging because they unanimously voted to initiate this,” Ender said. “Their job is to really make sure when properties come before them that are possibly historic …to look at all the facts and whether it meets that criteria.”

“I’m always disappointed when there’s a characterization that people are being greedy,” Fischbach said. “When you have property this size there’s a significant tax burden, maintenance and refurbishing is expensive. They just can’t do it any longer.”

Historic Preservation Commission member Sherry Rampy used the word “greed” when discussing the commission’s obligation to address the public interest related to historic preservation and the possibility of the Youngs selling the property to a developer to subdivide.

“I really strongly think that we should move forward,” Rampy said during the meeting. “I don’t think there’s financial hardship.”

The Youngs’ request to demolish the home has been denied until the City Council makes a decision. On Nov. 1 a Phoenix hearing officer will consider whether the new zoning overlay would create an economic hardship for the homeowners. On Nov. 7 the city of Phoenix Planning Commission is expected to consider the overlay zoning, with the issue going to the City Council for a decision in December.