Home / Business / Hatcher Road group gets boost from the city

Hatcher Road group gets boost from the city

By Colleen Sparks
A group of business and property owners in the Hatcher Road area is thrilled that the City of Phoenix is on board with their efforts to revitalize their neighborhoods. 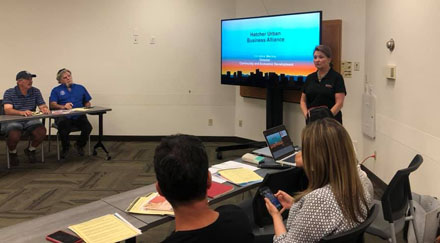 Christine Mackay, city of Phoenix Community and Economic Development director, talks about business growth in Sunnyslope and around the city at the Hatcher Urban Business Alliance (theHUB) meeting Aug. 8 in Sunnyslope (photo courtesy of theHUB).

Cheers erupted and supportive words were expressed often during and after a presentation city of Phoenix Community and Economic Development director Christine Mackay gave at the Hatcher Urban Business Alliance (theHUB) meeting Aug. 8 in Sunnyslope. Mackay talked about Phoenix’s economy, how to bring new businesses onto Hatcher Road and ways the city can help with small business development and retention at the regular theHUB meeting at  HonorHealth John C. Lincoln Medical Center.

A group of business owners along Hatcher Road, which formed the Hatcher Urban Business Alliance (theHUB) more than a year ago, is determined to clean up the business corridor, and rejuvenate the surrounding Sunnyslope area. The group charges no dues and has about 120 members.

Mackay answered participants’ questions, talked about ways the city can assist with revamping vacant properties and discussed grants and funding mechanisms neighborhoods may be eligible to seek. She explained the differences between business improvement districts and opportunity zones and how they benefit neighborhoods and business communities.

“What you guys are doing here in the HUB is amazing,” Mackay said. “We’re super excited to work with you in Sunnyslope in the HUB. We can drive new business, new development, drive down vacancies.”

According to Mackay, Phoenix is the fastest-growing city in the country and is “attracting high-tech, knowledge economy, very robust jobs.”

Mackay said she and her economic development team could help communities market their areas and drive tenants into buildings. She, members of theHUB and Phoenix Councilwoman Debra Stark, whose district includes Hatcher Road, plan to create marketing materials to try to attract investment in property in Sunnyslope. The vacant real estate in the area is being documented to try to get businesses to expand into the area.

“You bake the cake,” Mackay said. “We just get to come in and put a little icing on it.”

Caroline Lobo, co-chairwoman of theHUB, told Mackay she believes Hatcher Road is not up to the same standards as other streets in the city and asked how Phoenix could help improve it with enhanced trees, landscaping and other amenities. It also has poor lighting and sidewalks, Lobo said.

Mackay said she spoke to Stark to see if the city could “reprioritize” the road.

She also said the Opportunity Zone program, which was established after Congressional approval in 2017, was created to increase investors’ investments into specific, low- and median-income communities. Part of Sunnyslope is in an Opportunity Zone, as are several other areas in the city chosen by the Phoenix City Council. These spots are “meant to encourage people to take their capital gains and reinvest it into very specific areas of the community,” Mackay said.

Mackay also noted that a business improvement district (BID) could provide improvements to a particular area, including new streetlights, landscaping and safety services. Property taxes fund these districts but they can only be formed if a certain percentage of property owners in the affected area approve it.

The advice and support Mackay provided was well-received.

“This was an amazing presentation,” Andy Sobczak, secretary for the East Sunnyslope Neighborhood Association & Block Watch said. “To have this momentum in Sunnyslope, I’ve never seen it go up like this before.”

“Knowing what the opportunities are for us is immense,” she said. “For her to say she’s willing to help, that’s a big win for us.”