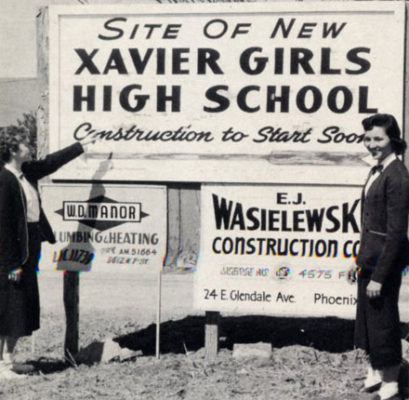 This archival photo from the early 1950s shows two of Xavier High School’s students, excited to point out that their new campus is about to start construction. The school was originally located in two classrooms at Brophy High School. The new campus opened in 1953 (photo courtesy of Xavier College Preparatory).

Seventy-five years ago, the first and only all-women’s Catholic high school in Phoenix opened its doors to its inaugural class of eleven students.

Founded in 1943 by the Jesuit fathers of St. Francis Xavier Parish and staffed by three Sisters of Charity of the Blessed Virgin Mary, the groundbreaking new Xavier High School was originally located in two classrooms at Brophy High School, a Catholic all-men’s school that had been shuttered during the Great Depression due to financial hardship.

Thus began Xavier’s journey from the humblest of beginnings to the remarkable institution that it is today.

Throughout the decades, under the strong, consistent leadership and steadfast dedication of the BVM Sisters, Xavier has evolved from a single class of 11 students into a nationally recognized college preparatory with a student body composed of 1,200 young women.

The school has built a tradition of excellence through its commitment to the Catholic faith, innovative academic curriculum, community service, leadership development, and diverse extracurricular opportunities. One-hundred percent of Xavier’s graduates attend post-secondary colleges and universities, and its alumnae network of nearly 10,000 women extends across the country and throughout the world.

The original faculty of three has expanded to a faculty and staff of more than 200. The school’s present campus, which opened in 1953 to accommodate Xavier’s burgeoning enrollment, has tripled in size from one building to 20 acres that encompass a beautiful chapel and state-of-the-art facilities.

Despite its exponential growth, Xavier’s mission to educate young women of faith has never wavered.

Earlier this year, the school began to celebrate the successes of its first 75 years with a myriad of “Diamond Jubilee” tributes and events that included a Traditions Day that united students and alumnae at a special school assembly, and an all-alumnae fete that brought hundreds of Xavier graduates from the Class of 1947 through the Class of 2017 back to the school’s campus.

Xavier College Prep has been recognized three times as an exemplary National Blue Ribbon School by the U.S. Department of Education, and is one of only 600 schools worldwide to offer the prestigious AP Capstone diploma program. For more information about the school, visit www.xcp.org.