Girl helps save family from fire

By Teri Carnicelli
Second grader Monibelle Townsend, 7, was one of dozens of students at Desert View Elementary who last month were taught fire safety skills and drills by members of the Phoenix Fire Department on the school’s campus, located at 8621 N. 3rd St. 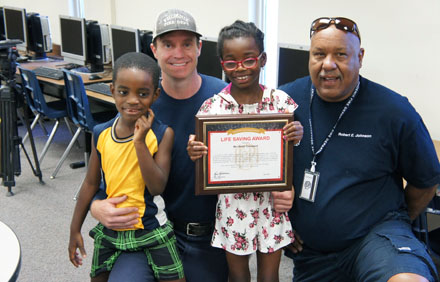 Monibelle Townsend, 7, was presented with a Life Saving Award for getting her little brother, Abel, 6 and her grandmother out of their apartment during a fire. Congratulating Monibelle on her award are Firefighter Tommy Reeve (left) and Fire Captain Robert Johnson (photo by Teri Carnicelli).

The fire department even brought its “smoke house” trailer, which simulates a room filling with smoke and setting off a fire alarm.

No one could predict that just a few days later, Monibelle’s own home would be destroyed by fire—and that what she had learned would save not only her life, but the life of her little brother and her grandmother as well. Her grandmother was babysitting while the children’s mom was at work.

For her brave actions that night, the Phoenix Fire Department on May 22 presented Monibelle with its citizen Life Saving Award. The event took place at her school.

The fire at her apartment occurred just after 9 p.m. on April 13. When Engine 7 arrived on scene, the two children and their grandmother were already safely outside.

“I woke up and I thought I smelled smoke,” Monibelle recalled. “I heard the fire alarm and I went out of my room and saw fire. I woke up my grandmother and brother and told them to get out of the house. My brother was scared and didn’t move so I grabbed him and we ran outside.”

She recalled that the visiting firefighters at her school had taught her if you hear an alarm, you get out of the house right away, don’t stop to take anything with you, just go.

“They also taught me to feel the door, and see if it was hot or cold. I felt the door and I thought I had to get away because it’s getting a little bit dangerous,” Monibelle said. “I didn’t want my family to get hurt. I just had to do something to save them.”

Fire Captain Robert Johnson and Firefighter Tommy Reeve, who made the presentation to the students last month, were on hand for Monibelle’s award presentation, and said they couldn’t be prouder of her.

“We’re just really happy that we were at the school at that time and that she was able to remember what we taught her,” Reeve said.

The apartment was a total loss, but Desert View Elementary’s social worker put out a school-wide e-mail requesting aid for the family, and several gift cards were donated. The family also had other family members who were able to donate furniture.