Two school districts in the North Central Phoenix area are asking to extend budget overrides that were previously okayed by voters.

The Washington Elementary School District (WESD) has called for a special Maintenance and Operations Budget Override election on the Nov. 6 ballot. So, too, has the Glendale Union High School District (GUHSD). 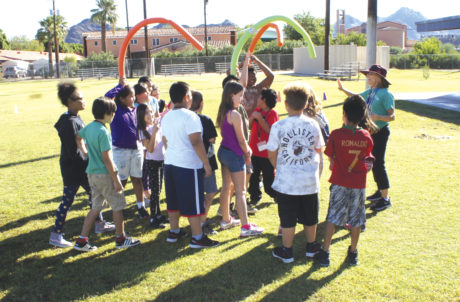 Fourth graders at Desert View Elementary—part of the Washington Elementary School District—listen to instructions from PE teacher Vicky Bonavito as the prepare for a game of “mosquito tag.” WESD has an M&O override extension on the Nov. 6 ballot, and if it fails, programs like PE, art, music and full-day kindergarten would likely be cut back throughout the entire district (photo by Teri Carnicelli).

An M&O override asks voters within the district to approve additional maintenance and operations funding for local schools, earmarked for specific educational purposes and generated through local property tax levies. With voter approval, state law allows a school district to override these limits and increase the budget by up to 15 percent of the district’s Revenue Control Limit.

The money approved earlier this year by the Arizona Legislature increased the base support budget for school districts. The additional funds were intended to increase teacher salaries. Those districts who fulfilled that promise are still left short for other areas.

WESD’s 15-percent override was most recently approved by voters in 2013, but has actually been in place since 1990. Each new budget override is in effect for seven years. With voter approval to continue the override, it is estimated that the total amount of the override for fiscal year 2019-2020 will be $19,342,879. If the override is not approved, the existing 15 percent override will begin to phase down by one-third each year beginning in 2019-2020 and be completely gone in 2021-2022.

If WESD’s new override is not approved, the current override would continue through the 2018-2019 school year. The district will plan to reduce the budget by over $6 million in each of the following three years until the budget capacity is completely eliminated at the end of 2020-2021. Ultimately, current student programs and services may have to be reduced or eliminated.

GUHSD is hoping to continue the 10 percent override that it already has is in place. The district operates nine high schools, including Sunnyslope, Washington and Thunderbird. According to a mailer sent out by Citizens for Quality Education, “Override funding supports GUHSD’s academic excellence and helps ensure students are college- and career-ready upon graduation.”

A Blue Ribbon Citizens Committee formed by the district earlier this year voted 67-1 in support of the need to continue the override. Voters previously approved an M&O override in November 2009, and again in November of 2014.

The committee was unable to determine specific reductions to the district budget that would not have negative consequences to GUHSD’s schools. Because budget reduction amounts are mandated by state statute, they offered more general areas for budget reduction decisions to be made by the district, should the override fail.