Home / Features / Can a methadone clinic benefit a community?

Can a methadone clinic benefit a community?

By Teri Carnicelli
According to the Centers for Disease Control (CDC), about 66 percent of the more than 63,600 drug overdose deaths in 2016 involved an opioid.

In addition, the CDC reports that the number of overdose deaths involving opioids (including prescription opioids and illegal opioids like heroin and illicitly manufactured fentanyl) in 2016 was five times higher than in 1999. 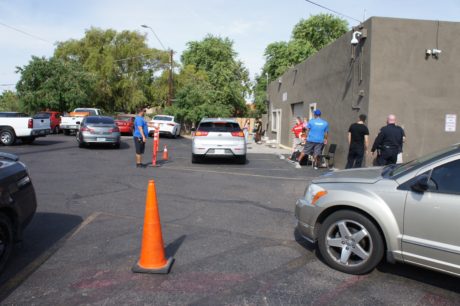 As federal and local governments try to figure out how to combat the crisis, private companies are investing in clinics to offer treatment to these primarily heroin addicts, and because of the widespread nature of this addition, business for these companies is booming.

One Scottsdale-based company, Community Medical Services (CMS), wasn’t prepared for the number of clients it would see at an outpatient addiction treatment clinic it took over a few years ago at 23rd and Northern avenues. The huge influx of new clients not only overwhelmed the clinic but impacted the adjacent neighborhood as well.

And that’s where this story really begins.

A task force made up of state, city and neighborhood leaders, along with representatives of CMS, has been meeting to address concerns about the methadone clinic at 23rd and Northern avenues.

Currently there are very few, if any, specific city or state zoning regulations when it comes to the location of these types of treatment facilities. Unlike medical marijuana dispensaries, which have several layers of zoning regulations, these so-called “methadone clinics” can exist anywhere there is an already present C-2 zoning—and nothing prevents them from operating 24-7, as the Northern Avenue clinic began to do in November last year.

But State Sen. Kate Brophy McGee hopes to see that lack of regulations changed in the next legislative session.

And City Councilwoman Debra Stark, who represents the Sunnyslope area, also wants the city to take a closer look at the zoning code to see if something can be added to more closely regulate this growing for-profit industry that serves those suffering from addiction.

At its peak, the CMS clinic was seeing about 1,800 patients a day. The two small parking lots couldn’t accommodate the continuous flow of contracted vehicles (mostly through Veyo) dropping off and picking up clients, and the inside waiting room would become overflowing, with patients waiting outside, sometimes along the sidewalk or at nearby businesses.

The result of such a mass of people in a relatively small area was felt immediately by adjacent residents and business owners. Hillary Rusk, who is an active member of the Royal Palm Neighborhood Association, heard complaints of loitering, trash, people dealing drugs on their property, Veyo drivers using other businesses’ parking lots, jaywalking, and more.

“Consider that other methadone clinics are not causing these problems where they are located; they cap their patient numbers, they don’t have parking or traffic issues, they have room for indoor waiting,” Rusk said in a post on the Nextdoor.com online platform. “If this clinic was just like any other medical facility, no one would even know that it is a methadone clinic. That is the way it should be.”

Nick Stavros, CEO of Community Medical Services, admits there were some very public failures at the 23rd Avenue and Northern clinic, but that he and his team are working hard to get those issues fixed. “We had no idea it was going to explode like that. It’s been really hard to dig ourselves out of this. We don’t want to turn anyone away, but it has been overwhelming.”

Going 24-7 late last year brought in more clients than expected in the overnight hours. Currently meds are administered between 4:30 a.m. and 11:30 p.m., and then again from 1 to 8 p.m. Monday through Friday, and 5 a.m.-2 p.m. on Saturdays and holidays that fall on a weekday. Intake hours, which can involve blood tests and other drug screenings, signing up for services and processing insurance, are 24-7, either by appointment or via walk-in.

But it’s the flow of patients that begins at 4:30 a.m. that had grown to a breaking point for the clinic and the adjacent community.

“We are trying to bring in more support and find solutions,” Stavros said. “We just purchased the lot to the south of us and will be expanding our parking lot for better traffic flow.”

While security was previously provided by a contractor during the day, and by off-duty Phoenix police officers overnight, as of mid-August CMS is working exclusively with the Phoenix Police Department, with off-duty officers in uniform, on-site, 24 hours a day, in eight-hour shifts.

But perhaps the biggest impact has come from a CMS clinic that opened in late July at Glendale and 51st avenues. More than 400 clients already have had their cases transferred there from the Northern Avenue clinic, with a total of 500 expected to be transferred by the end of September..

Another clinic is tentatively scheduled to open in October near 27th Avenue and Indian School Road.

But additional clinics will be needed, not just to ease the burden at the Northern Avenue clinic, but to accommodate the large number of addicts seeking treatment in Phoenix. And, Stavros, said, particularly in the nearby Sunnyslope community.

A clinic in the ’Slope?

“We mapped out addresses of existing patients who go to the Northern Avenue clinic, and the largest concentration, outside of the I-17 corridor, was from Sunnyslope,” Stavros said.

Stavros calls it a “hot spot” and said there is no question that a clinic there would greatly benefit those in the Sunnyslope community who are seeking help in fighting their opioid addiction. CMS is looking for an appropriate site, and Hatcher Road is on the radar, particularly since there are already social service agencies housed along that roadway, providing a sort of cluster of complimentary services.

Stavros admitted the very public mistakes made at the Northern Avenue clinic have hurt CMS, even as the company is trying to get those fixed. But he emphasized that any new locations will already be designed to prevent those same problems.

His assurances may not be good enough for a community already on edge about these types of facilities, and the perceived clientele they serve.

Gerre Heron, co-chair of the new Hatcher Urban Businesses (HUB) organization, says he is 100-percent against any methadone clinic coming to their area. “This goes against everything we are working toward in terms of revitalizing Hatcher (Road).”

“My business is located in Sunnyslope and I’ve watched my community turn into a cesspool of addicts, crime, halfway houses, and prostitution,” wrote David Hilker, in an open letter to Nick Stavros and CMS. “I know firsthand that crime has increased, as I witness it daily. I don’t want any of your clinics in my neighborhood.”

“It really is a problem; I understand we need to treat these people recovering from addiction, but the neighborhood should not have to pay the price,” said Sen. Brophy-McGee, who lives in Sunnyslope and represents Dist. 28. “We are hoping to present some kind of solution next session with the legislature.

“It is like sober living homes—if they are properly run, you don’t even know they are there.”

And Brophy-McGee, along with Councilwoman Stark—who represents Sunnyslope—both contend that government oversight needs to be created to prevent future negative impacts on neighborhoods.

“Phoenix District 5 Councilwoman Vania Guevara and I are continuing discussions with our Phoenix city attorney to see if there are any ordinance changes the city could look at regarding the zoning/use for these types of facilities,” Stark said. “We will stay on top of this issue.”

The 23rd Avenue & Northern Neighborhood Preservation Task Force met on Aug. 16, and Brophy-McGee reported that, “it was acknowledged by all attendees that Arizona is in the midst of an opioid crisis and a heroine epidemic, and that treatment centers are needed to combat this growing problem and turn the tide. It is imperative that this be done while preserving the safety, peace and integrity of the neighborhoods adjacent to treatment centers.”

She said that officials from AHCCCS (state insurance provider) and Mercy Maricopa (licensing agency) responded that the CMS clinic is now under a remediation plan to reduce the volume of patient traffic and Veyo traffic. The goal is to reduce from 1,800 patients per day to 240 per day, with corresponding transport reductions, within the next six months.

AHCCCS will provide frequent updates to the Task Force regarding patient census, which will be shared with the neighbor leaders. But it may come as a surprise to those leaders how many of the clinic’s clients are from those very neighborhoods they represent.

Stavros said that “people have a pre-conceived idea of who these ‘addicts’ are—but in reality, it’s everyone”—stay-at-home moms, high school coaches, business owners, college athletes. The path to addiction is wide and varied, and can impact anyone, from any walk of life, he pointed out.

“It could be your neighbor, it could be a family member. These are people who live in your community and who are struggling to free themselves from addiction. This is not an ‘us or them.’ This is everyone.”