By Teri Carnicelli
Ashley Ezell was born with a rare eye disease, called Stargardt macular degeneration, which causes progressive vision loss. It is an inherited disorder in her family; her father, younger brother, an uncle and two aunts all have it, to varying degrees. She was first diagnosed when she was 12 years old. It wasn’t long after that she was declared to be legally blind.

“It’s rare, especially in children,” Ezell explains. “There’s not a lot of research about it. You basically have to learn what works for you. You memorize a lot of things—shapes and colors, and directions of how to walk from one place to another.” 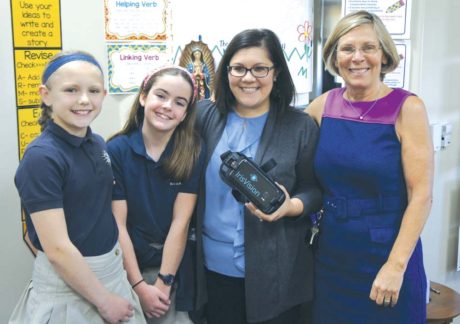 Ashley Ezell, a fourth-grade teacher at St. Francis Xavier School who is legally blind, holds her new IrisVision “goggles,” which were purchased with the help of members of her school family, including Girl Scout Troop 532—represented here by Hazel Vynalek, left, and Annika Dowdal—and fellow fourth-grade teacher Nancy Grucky (photo by Teri Carnicelli).

Regardless, Ezell was determined to achieve her goal of becoming a teacher. In college, she had a note-taker to help in class. She used computers that could greatly enlarge what she was reading on the screen. Everything was a challenge, but Ezell refused to give up.

Five years ago she joined the teaching staff at St. Francis Xavier School in North Central Phoenix. For the last two years, she has taught the fourth grade.

She’s learned the layout of the school, and of her classroom. As for her students, she gets to know their voices, their shapes, and even the way they move.

Ezell says she’s a Type-A personality, which helps her to be super organized and to plan things thoroughly in advance. Particularly when she has to use a regular teacher textbook to plan her lessons.

It’s been fun and rewarding—but the challenges remain.

Ashley’s family first started looking into any technology that could help them. There aren’t a lot of options out there, but one of the first to break ground in this area was eSight Electronic Glasses. However, the glasses are expensive, close to $10,000.

It was fellow fourth-grade teacher Nancy Grucky who picked up the torch to keep searching, and SFX music teacher Nancy Nemeth who eventually landed on IrisVision, which uses a modified Samsung virtual reality (VR) platform and goggles.

“They were willing to come out and see Ashley in the classroom, let her see the goggles firsthand and answer her questions,” Grucky explains. “When she put the goggles on she was able to clearly see somebody standing in the courtyard from the upper balcony.”

The IrisVision goggles cost just over $2,500, so Grucky asked the school community (staff, parent volunteers, etc.) if anyone would like to donate. Within three days, Ezell had the money for the goggles and the order was placed. She even had enough left over to pay for the next two software upgrades. One of the largest contributors was SFX Girl Scout Troop 532, who donated $532 from their cookie sales.

IrisVision uses magnifiers, a gyroscope and specialty software, allowing the user to zoom in up to 12x magnification, and perceive a 70-degree field of view. If you pop open the phone-like attachment, the view screen is divided into two identical boxes, which look like a video, but are actually real-time images that can be blown up to whatever size is needed while keeping the overall scene in context.

When standing in front of the large dry-erase white board, she would often have to be right up against it, facing forward, to read what is written on it. “I was blocking the students’view and moving all around to read it. Now I can stand in the back of the room and still see the board,” Ezell explains.

Hazel Vynalek, 10, and Annika Dowdall, 9, both members of Girl Scout Troop 532 and students in Ashley’s class, were excited to help their teacher. When they saw Ashley wearing the unit, they thought it “looked really cool.” But they were astonished to discover how well she could see with them on.

“She could recognize us when we were at P.E., and when we played a board game in class, she could see all the pieces,” Annika said.

“At first I was worried, it’s so big, but the kids made me feel comfortable wearing them,” Ezell says. “It’s amazing—I can read along with a chapter book, easily. I can follow along where they are, help them when they are stumbling on a word, which is what a teacher is supposed to do. It’s been a game-changer for me.”

“I think it has been a life-changer,” Hazel says. “It really helps her be a great teacher.”