By Patty Talahongva
Rich Hinojosa may have grown up in Texas, but he’s moved to Arizona four times and he’s pretty certain this is now his permanent home. Phoenix is definitely the home of his first restaurant, CRUjiente Tacos, 3961 E. Camelback Road, which he co-owns with Jason Morris. 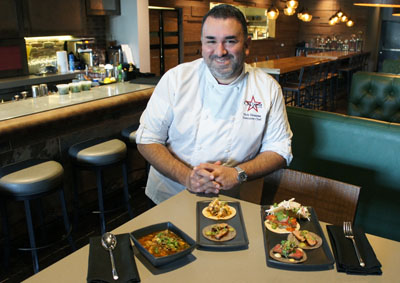 Chef Rich Hinojosa, co-owner of CRUjiente Tacos, makes the popular Posole Rojo (left) himself and has developed a menu of globally inspired tacos, including: (center plate) the Pork Belly with house quick kimchi and sriracha aioli, and the Duck Breast with mole and verde salsa; and to the right, a Texas Wagu Cap Steak with karashi mustard and cilantro mojo; another Duck Breast taco; a Korean Fried Chicken with gochujang and mojo de cebollin; and a crunchy Lamb Taco with cotija, pickled red onion, jalapeño and “birria” sauce (photo by Teri Carnicelli).

Like the food, the name is a blend. “Cru” comes from the French term that rates wine of high quality. “Jiente” means crunchy in Spanish. CRUjiente serves both crunchy tacos and street style tacos, but as Hinojosa explains, “These aren’t traditional tacos. I don’t call this a Mexican food restaurant.

Raised in a family of cooks, his aunts taught him how to make Mexican dishes. He loved watching cooking shows on PBS, long before the Food Network came along. After high school, an auntie took him on a cruise to the Caribbean and Hinojosa soaked up the array of international foods served on the ship. He met the chef, who encouraged him to go to culinary school—which he did, prompting his first move to Arizona to attend the Scottsdale Culinary Institute.

His career has taken him to San Diego, back to Phoenix where he worked at Mary Elaine’s, off to Hawaii where he really learned from a variety of cultures. “The food experience was phenomenal,” he recalls. He experienced foods from Vietnam, Australia, Thailand—“I couldn’t put a price on (the) almost four years,” he says of his experience there.

In his career he’s made more than 80 different types of tacos. Today he features 11 tacos on his menu and few more on the weekly specials menu.

“This is really a blend of me, all the places I’ve cooked, people I met, and family dinners,” says Hinojosa. “It’s not a fad, not fusion. It’s 25 years of cooking and travel.” The menu is most definitely flavor-driven.

Perhaps the Posole Rojo ($8), which simmers overnight, is the one item that is made in the traditional way with pork, hominy, lime, onion, jalapeno and cilantro. But glancing at the menu you’ll also see the Texas Wagyu cap steak taco or the Korean fried chicken taco. The ahi poke taco with taro root, seaweed, sesame, green onion and kabayaki shows off some of the flavors Hinojosa learned about while in Hawaii.

Where the food comes from is important because it impacts the flavor. For example, clams that live in more muddy areas have a different taste than those that live in sand. He prefers ones raised in mud. You’ll find a fried clam taco periodically on the weekly specials menu. All tacos are served on either blue corn tortillas, which are made in-house, or white corn tortillas.

There are vegetarian options on the menu as well as a kids menu. It isn’t printed, but ask your server what you can order for the younger diners in your party.

Desserts include strawberry pico and bueñuelos. “My mom used to make the best bueñelos,” he says. He serves his dusted with cinnamon and sugar.

Even the drinks are special at CRUjiente, which offers craft cocktails and full selection of tequila, bourbon and wine. The beer is kept in a salt bath to ensure it’s served nice and chilled.

While Hinojosa takes care of the menu, Morris handles the bar side. As a former wine distributor, he’s well versed on the reds, whites and blends.

Hinojosa has racked up several awards such as the People’s Choice at Devour Phoenix and he was recently asked to appear on a food show himself. He’s one of the chefs competing on the show, “Chopped,” which was set to air on May 1. Of course he can’t say how he did, but he says it was fun and hard. “I was shot at the end of the day,” he laughs and adds, “I appreciate the challenge.”

Hinojosa will have some special tacos for Cinco de Mayo and CRUjiente will have special hours that weekend. Check the website, Facebook page or just call 602-687-7777 for details.