By Marjorie Rice
In a part of North Central Phoenix where new restaurants seem to spring up like wildflowers after a rain, there’s a clubby, cozy steakhouse that’s been drawing folks from all over the Valley since the ’60s. 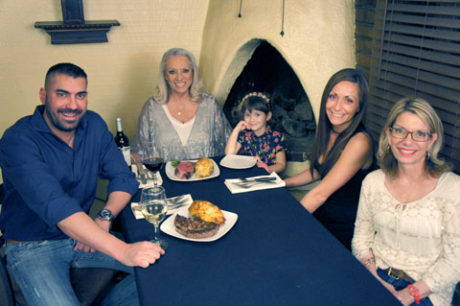 From left: George Tompras and his mother, Maria Tobras, took over Feeney’s in 2012, and are helped out by George’s daughter Maria, 4, George’s girlfriend and bartender Amanda Kenly, and longtime bartender Judy Medina. Beef is a strong seller at the restaurant, including the customer-favorite prime rib and the ribeye, both here served with a loaded twice-baked potato (photo by Teri Carnicelli).

Feeney’s Restaurant & Bar is one of those places where everyone does indeed know your name. Step into the entry and you’ll feel like you’ve stepped into the past. Dark wood, low ceilings and brick-lined dining nooks give the place its cozy atmosphere, though the restaurant, which can seat 120 patrons at a time, is deceptively roomy.

You’ll be warmly greeted by longtime bartenders Amanda Kenly or Judy Medina. And you’ll likely get a hug from them or Maria Tobras, who was a server there for several years before buying the place in 2012 with her son, George Tompras.

(And yes, their names are spelled differently, thanks to immigration officials who mixed up the spellings when they came to this country from their native Greece.)

Feeney’s began as Cork ‘N Cleaver in 1965. In 1983, Pat Feeney, who worked there, bought the place and changed its name. Not one to fix what wasn’t broken, Feeney kept the steakhouse focus from the original menu, adding some Irish touches, especially around St. Patrick’s Day. Later it was purchased by Louie Panos, a Greek who added his own cultural culinary notes.

“Louie kept a lot of recipes from the original Cork ‘N Cleaver, like the cream of broccoli soup that everybody was always asking for,” George says. “We still have that recipe even today.”

While they made a lot of changes in updating the building, including adding a private dining room at the front, Maria and George wisely kept the feel and the format that brings patrons from all over the Valley. Beef—certified prime Angus beef—leads the menu, and prime rib (a customer favorite) has pride of place along with steaks, ribs and burgers.

And Feeney’s enormous loaded twice-baked potatoes (the size of a kid’s Nerf football) are the perfect side.

The menu also features Greek dishes, including terrific lamb chops with Greek seasonings ($29.95), Greek salad with feta and kalamata olives ($9.95), saganaki (flaming Greek cheese served with pita bread for $10.95), and spanakopita with tzatziki sauce (Greek spinach pie with a yogurt and cucumber sauce for $8.95). Hearkening back to Feeney and his Irish flavors, there’s shepherd’s pie ($15.95), and a killer beef Wellington, rarely seen on many menus these days.

Good food draws customers, and great service keeps them coming back for years—certainly the case with Feeney’s.

“It comes down to being friends,” George says. “I think Feeney’s has been successful because Maria is very personable. She has a huge fan base and they come to see her.

“We have people who come every day,” he points out. “We might close on a Sunday, for a holiday, and they’ll say, ‘We didn’t know what to do because we couldn’t come here’.”

And it has been going on for decades.

“Customers will tell me, “My grandfather used to come here and I came here when I was 5 years old.’ And now that person is 35.”

That friendly vibe has become even more important, George says. “When Maria and I bought the restaurant, we didn’t have that much competition in the area, but since then more than 30 restaurants have popped up around here.

“We started panicking a little, thinking, ‘What can we offer that they can’t?’ They have new places, beautiful décor, all the fancy stuff. It proves that if you serve good quality food and you take care of your customers with your service, you will never fail. Instead of our business going down, it went up. We couldn’t have done it without a great staff and people like Amanda and Judy.”

And that’s Feeney’s. A great neighborhood restaurant that has stood for years in the same spot, serving generations of customers, sticking to a tried-and-true menu format.

And where everybody knows your name.