Dust Cutter’s Chef Strong kicks it up with native flavors

There’s a new chef in town.

Well, back in town.

He’s Jack Strong, and he recently was named executive chef for the Renaissance Phoenix Downtown hotel and its signature restaurant, Dust Cutter. 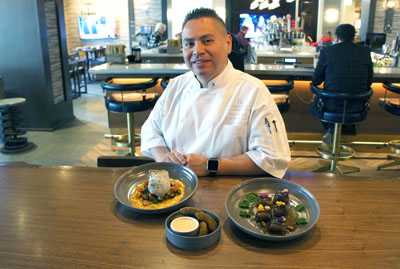 Jack Strong, executive chef for the Renaissance Phoenix Downtown hotel and its signature restaurant, Dust Cutter, infuses some of his own Native roots into the menu, including, from left: a grilled salmon with creamed elote, vegetable succotash, and huitlacoche foam; avocado “fries” with chiltepin pepper aioli dipping sauce; and the house-smoked pork belly (photo by Teri Carnicelli).

Valley food lovers know Strong best from his stints at two of the area’s finest dining spots: chef de cuisine at Kai at Sheraton Wild Horse Pass Resort and Spa, and sous chef at Windows on the Green at The Phoenician.

There, Strong gained a national reputation for innovative cuisine with deep roots in his Native American heritage and its indigenous foods—corn, melons, beans, cactus and cactus seeds, mesquite smoked buffalo, tortillas, chiles and the like—with a modern approach.

While at Kai, Strong co-authored “The New Native American Cuisine–Five Star Recipes from the Chefs of Arizona’s Kai Restaurant,” and was nominated for a James Beard Long-list for Best Chef: Southwest.

Despite his lofty place in the Valley and national food scene, family came first, and when his grandmother’s health began to fail about eight years ago, Strong moved home to watch over her care.

“My grandmother raised me and adopted me as her own,” says Strong, an Oregon-born native from the Confederated Tribes of Siletz Indians. “It was great to be back home and around family.”

While in the Northwest, Strong continued his career in fine dining at high-end resorts, first as chef de cuisine at Salish Lodge & Spa in Snoqualmie, Wash., then as executive chef for Chinook Winds Casino Resort in Lincoln, City, Ore.

While he loved being home, the desert continued to beckon, Strong says. “I’ve always loved the desert and always have come back to visit.”

His grandmother died in 2015, and Strong spent the next year wrapping up family matters, taking time to travel and get married before deciding where to go next.

With his resume, Strong could afford to be picky in choosing his next post. “It was nice to be able to have options,” he says. “I was impressed with the Renaissance, from the general manager on down, and I’m excited to be a part of it.”

The hotel at 100 N. 1st St. underwent its own renaissance last year, with a $13 million renovation that included Dust Cutter, a new dining and drinking destination. Tucked in a corner of the main lobby, the swank saloon features glass garage doors that open onto the now pedestrian-friendly Adams Street (picture sidewalk pavers and lots of shade trees).

Dust Cutter—that’s what cowboys called drinks that could clear throats coated from long days on the dusty trail—opened last January. Its quirky design vibe, where cowboy paraphernalia and art meet austere urban chic, would be reason enough for a visit.

But that’s just part of the story. Come for the eye candy, stay for the drinks and eats. Especially the cocktails: Ace in the Hole, Calamity Jane, Snake in my Boot, among old standards, and specialties whipped up at mixologist Tony Escalante’s whim.

(For the curious, here’s a sample: Snake in my Boot combines El Silencio Mezcal, Montenegro Amaro, Hatch Chile rich simple syrup, Strawberry Balsamic Shrub, Aperol Apertivo, fresh squeezed lime juice, Angostura Bitters, with a dried Chiletepin Rim. Get the picture? Southwest indigenous in a glass with a kick. Sure to cut the dust.)

While he’s making some changes to Dust Cutter’s menu, Strong will keep its urban saloon vibe. “We’re reworking some flavor profiles, streamlining processes and realigning some of our dishes,” he says. “We’re adding a few new items, though most of the dishes will stay.”

Strong calls it tweaking—for example, braising rather than frying the House Pork Belly, finished in the oven with an agave lacquer to form a glaze, and served with apple butter and pickled red onions.

The major change will be in desserts. “We’re revamping that completely,” Strong says. “I want to highlight indigenous food in the desserts.” Look for baked Arizona, with a Queen Creek olive oil cake base, ice cream and meringue, infused with saguaro syrup and seeds.

Strong’s influence will percolate through all the food services at the Renaissance.

“I really want to pick up where I left off at Kai,” he says, “continuing to celebrate indigenous foods that have been here hundreds of years, but in a modern way. I’m very excited. It’s good to be back.”

Dust Cutter is open daily at 11 a.m. for lunch and dinner. Happy Hour is 3-6 p.m. Monday through Friday and features the popular Avocado Fries with chili aoli ($7), and the Hatch Chili Hayden Mills Corn Bread Skillet ($5). Note there is metered street parking surrounding the hotel, and valet parking for $5 with validation. For more information, call 602-333-0000 or click here.