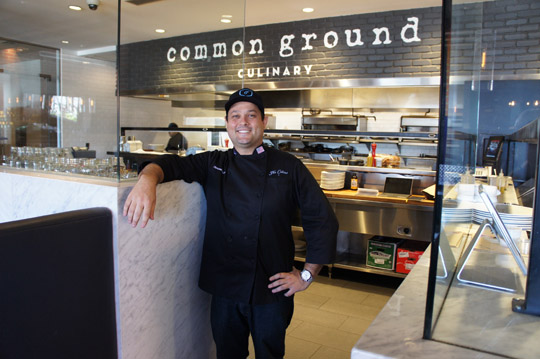 Despite their success, Collins wasn’t satisfied. All the locations were profitable, but he felt two needed tweaking. And so the Twisted Grove at 32nd Street and Camelback has transformed into The Collins Small Batch Kitchen, and the Grassroots in Town & Country has become The Macintosh.

Customer tastes drove the transitions, Collins explains. “We changed the product mix for The Macintosh because we could see what people were buying. A lot more whiskey cocktails, for example. We sold a lot more beer, where in Scottsdale we sold a lot more wine.”

The menu changed as well.

“In the Scottsdale Grassroots, customers wanted more filets and baby back and short ribs,” Collins says. “At The Macintosh, there are a lot more sandwiches and salads. And we have a lot of eight- and 10-person groups coming out for a birthday or other occasion, versus more intimate date settings at Grassroots.”

While the menu has changed at The Macintosh, some Grassroots favorites remain—notably the Southern Shrimp and Grits, with blackened shrimp, jalapeno-cheddar grits, Tasso ham relish served with grilled focaccia ($18).

The grits reflect Collins’s Southern influences as a young chef. “I had an opportunity to go to New Orleans right after Hurricane Katrina,” he recalls. “It was one of the best, most eye-opening experiences I’ve ever had. Gas stations were only open a few hours a day, no grocery stores. We were the second restaurant in the entire city proper to open after the hurricane.

“Spending time in New Orleans after the storm showed me how people are proud of where they come from, and who they are, and how much food says about that,” Collins says. “It stuck with me and it’s literally how I’m living my life today. I live my life through food, as many people in New Orleans do. They relate to each other through food.”

At both re-brands, about a third of the menu items stayed the same, a third of the items are slight variations on the originals, and the other third are brand, spanking new—“very exciting, beautifully plated casual food,” Collins says.

New dishes at The Macintosh include the Bacon Steak appetizer ($18 for a shareable plate), Bacon Steak Mac and Cheese ($9) Braised Short Ribs ($24), and a Frenched Pork Chop ($24).

Décor changed as well, with a re-designed kitchen, new paint scheme, black leather booths and a 21-foot community table (there’s a smaller version at The Collins).

Similar changes can be found at the Collins. “There are a lot of offerings in this Camelback Corridor area, and competition is tough,” Collins points out. “We had to take a good look at ourselves and say, what do we want to be, and what do we want to serve relative to what other people are offering. We think that we’ve put together a timeless, classically beautiful restaurant.”

The restaurant is bright, open and airy, with high ceilings and a ton of windows which open fully, including folding patio doors that create an indoor-outdoor space topped with sunny yellow awnings. It’s a comfortable environment, with comfortable prices that won’t break your wallet.

“With the Collins we are making a clear statement that we’re going to offer the best product in this Camelback Corridor at the lowest price,” Collins says. As a result, no entrée at the Collins costs more than $24, and there are plenty of lower-cost choices.

New dishes at The Collins include hand-tossed pizza (gluten-free available) in a pecan firewood oven. “We’ve never done pizzas before,” Collins says. “We’ve had great, positive feedback about our pizzas, and also our peel and eat shrimp.”

The Collins offers a small-batch menu that will change often—sometimes it might be available just for one day. “This allows us to find products that may be extremely seasonal, or too costly to have on the menu full-time,” Collins explains. “We can bring it in, learn about it, try it ourselves, engage our customers and let them try it, and it allows us to continue learning about food.”

The new concepts have resulted in a great combination: good food served by pleasant, attentive but not hovering servers in a welcoming setting, and it’s resulted in a steady stream of regulars.

“This focus on the people who come into our restaurants, and our intimate relationships with them, is the reason we are a successful company,” Collins says.