By Patty Talahongva
One glance at the seemingly scant menu at Frasher’s Smokehouse, 3222 E. Indian School Road, will not prepare you for the intricacies of the barbecue you will soon eat. In fact, the word barbecue isn’t even on the menu. But what is on the menu is a variety of smoked, tender meats that would appeal to any barbecue lover, no matter what part of the country you hail from. 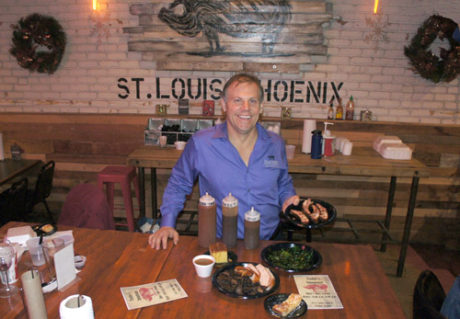 George Frasher, owner of Frasher’s Smokehouse, knows how to satisfy those who love barbecue—no matter what part of the country they are from. Some of the menu selections include: smoked turkey and burnt ends; gumbo; jalepeño corn bread; babyback ribs; flash-fried spinach; and for dessert, a Midwestern favorite, gooey butter cake. Any of the meats, which are all smoked and cooked in their own juices, can be topped with your choice of sauces, the three most popular of which are: Tennessee Tang, Kansas City Sweet, and Texas Spicy (photo by Teri Carnicelli).

Owner George Frasher can give you a Ph.D.-level course on the four regions of barbecue: the Carolinas, Memphis, Kansas City, and Texas. The St. Louis native earned his hospitality degree from the University of Missouri, knowing that one day he would own his own restaurant.

Today he and his mother, Beverly, own Frasher’s. She still lives in St. Louis and flies him special dough and Provel cheese from St. Louis icon, Imo’s Pizza, which he turns into his famous pizza that’s sold only on First Fridays. It sells out quickly, so get there early. “All the St. Louis people (in Phoenix) know,” he says, pointing out it isn’t on the menu, you just have to be “in the know.”

His flash-fried spinach isn’t on the menu, either, but it’s delicious and adds a nice touch of green to the meat platters that range in price from $12 to $16 and come with two sides. The most expensive meal is two pounds of babyback ribs for $24 and comes with two sides. For those who need a little green to cut all that meat, there’s also a vegetable of the day and salad options.

Frasher also offers daily specials. On Sunday he serves up competition ribs and uses a different dry rub only on this day. On Saturday he features pork steak. “I spritz it every hour,” he says and at the last hour of smoking, he “gives them a little love with brown sugar and honey butter.”

He’s been at the business for 19 years and tosses out bits of barbecue sauce history as he talks. “St. Louis uses more barbecue sauce than anywhere in the world,” he shares.

He likes to add an Arizona flair to his barbecue. “I only use Arizona pecan wood in the smoker,” but points out that he uses an Ole Hickory Pit smoker, made in Missouri, for all the meats. “I try to stay faithful to my roots.”

All barbecue—brisket, tri-tip, turkey, chicken, pulled pork and ribs—can be elevated with the house-made sauce, whether it’s vinegar or molasses based. Frasher makes both and in different styles. He serves two types of North Carolina sauce as well as a Tennessee Tang, Kansas City Sweet, Texas Spicy, and a mayonnaise-based Alabama White Sauce that goes really well on chicken and turkey. On special occasions he might whip up a sauce with something that catches his eye, like green chili or coffee beans.

Each day the meat is smoked fresh for the lunch and dinner menu. Then more is put in to smoke overnight. It’s one reason why he only stays open until 8 p.m.; the restaurant sell out of many of the selections almost nightly.

The kid’s menu features a variety of options, including chicken fingers, cheeseburgers, grilled cheese and, because it is a barbecue joint after all, pulled pork. Each comes with a side dish and a drink for $7.

Frasher’s was just featured on a new show, “Eat, Sleep BBQ,” on the Food Network. It aired on Dec. 30; you might be able to catch the episode online.

He has big plans for 2018, including turning an existing building on his property into a pizza parlor and name it 314, which is a St. Louis area code. He expects to open it on March 14, which also is National Pi Day (3:14). At first, he says, it will only be take-out until he builds a patio on the east side of Frasher’s.

He also plans on building an outdoor kitchen to beef up his steak dinner service. He operated Frasher’s Steakhouse in Scottsdale for more than a decade before it closed, and won several awards for his steaks—something he’d like to bring into his Phoenix location on a regular basis.

In his spare time, he’s taken the course to become a certified judge in the Kansas City BBQ Society. He’s also going to be a judge at the World Champion Barbecue Cooking Contest in Memphis in May. Eventually he plans on holding such prestigious contests here.

He loves to cater parties big and small and says that part of his business also is growing. He prides himself on the fact that many of his employees have been with him for more than 10 years. Together they smoke the meat fresh daily; he makes the sauces and the customers help them sell out nightly.

“I’d like this place to remind everybody about home,” he says. And what could be more reminiscent of home than a piece of gooey butter cake? It’s his mother’s own recipe and it’s as decadent and delicious as it sounds.