Home / Community / No light rail through Sunnyslope, after all

No light rail through Sunnyslope, after all

Preliminary plans for a suggested light rail route through the Sunnyslope community, from Metrocenter Mall on to Paradise Valley Mall, have been effectively scrapped by the Phoenix City Council. 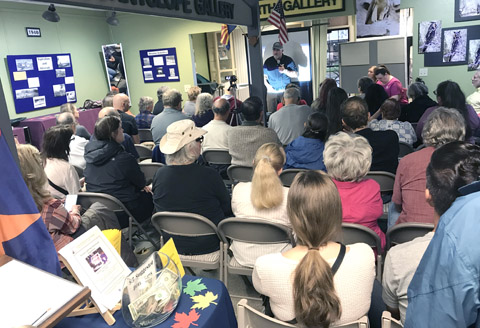 Don Schneidmiller, Transit Security manager for Valley Metro, speaks to a packed house at the Sunnsylope History Museum on Oct. 13 about security issues on light rail trains and platforms, and what is being done to address those issues (photo by Teri Carnicelli).

The council members voted on Oct. 3 to “delay” the Light Rail Northeast Expansion, which was still in the visioning stages. Since the expansion was not scheduled to open until 2034, and has now been postponed even further, it’s likely it will never be built at all.

There were two proposed routes to Paradise Valley Mall; one was a 12-mile route that would travel from Indian School Road to around 24th Street, possibly up the I-51 or close to it, and then over to around Tatum and Cactus. The other proposed route offered an 8-mile stretch that would travel from the Metrocenter Mall station east along Dunlap Avenue to 7th Street, and then up Cave Creek and east on Cactus Road.

Many residents of Sunnyslope had already expressed opposition to the route coming through the heart of their community, and were gearing up to fight what could have been a years-long battle. More than 50 residents attended an already planned meeting by Valley Metro on Oct. 13, hosted by the Sunnyslope Historical Society.

The money for the proposed expansion to Paradise Valley Mall was to come from the Transportation 2050 Plan, a voter-approved sales tax passed in 2015. But funds for that specific project have yet to be collected since other projects are much further up in the queue, including the Northwest Phase II Extension to Metrocenter Mall, scheduled to open in 2023.

The Phoenix City Council has indicated that any money collected in the future for the proposed northeast expansion would likely be redirected to much-needed road repairs instead.