Kiwanis spread the love—and the funds

By Teri Carnicelli
The North Phoenix Kiwanis Club on May 3 conducted its annual distribution of funds to area nonprofits, school-based groups, and other organizations that serve the Valley’s youth. The club is a subsidiary of Kiwanis International, whose mission is to “improve the world by making lasting differences in the lives of children” around the globe. 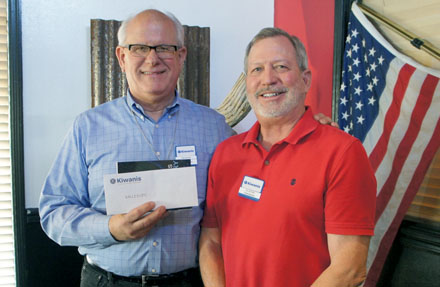 Jim Day, left, president of the North Phoenix Kiwanis Club, presents Cletus Thiebeau, president and CEO of VALLEYLIFE, with a donation check to support the nonprofit’s programs that serve those with developmental and/or physical disabilities (photo by Teri Carnicelli).

The bulk of the local club’s funds are raised every year as part of its Walk-A-Thon, which invites teams to participate and splits the profits raised through sponsorships and donations with those teams. North Phoenix Kiwanis Club President Jim Day said last year the Walk-A-Thon had more than 32 groups participating, and grossed approximately $360,000—half of which went to the club’s nonprofit foundation.

That money is then used to benefit other area groups that also service youth in the community. This year’s recipients included:

The North Phoenix Kiwanis Club also has other philanthropic programs, many of which take place during the holidays, including a Turkey Trot, Holiday Food Boxes, and a Christmas party for about 140 kids in WESD. It also purchases and donates student dictionaries to approximately 3,000 WESD third-graders each year.