By Felix Sarreal
Funkatronic Rex is a store for board, role-playing, card, and dice games (it also has puzzles), owned by Michael Laza, a native of Phoenix. It is a fun place to make new friends and learn how to play new games. If you want to learn how to play a new game, just ask one of the employees. 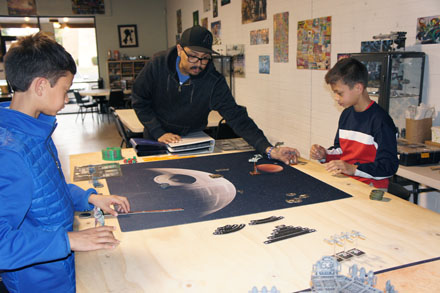 Michael Laza, center, owner of Funkatronic Rex, helps brothers Felix (left) and Beni Sarreal get set up for an X-Wing battle, which uses models, cards, plastic dials and even dice. Gamers of the more brick-and-mortar type can bring their own equipment or borrow the store’s (photo by Teri Carnicelli).

Most customers think the store, located at 1343 E. Northern Ave., is a great place to hang out and play your favorite games. Laza says that he satisfies kids and adults because he has games for both.

Funkatronic Rex has multiple shelves full of games to play for free. They are in the back corner, and you can find almost any game you are looking for there. You also can buy a game to give as a gift or to play at home. The store is large, but not giant, so you can almost always find a table to sit down and play a game, and almost every time you go, there are other customers there to play games with or talk to. The only time you can’t find a table is during special activities like Magic the Gathering tournaments, Armada battles, or X-wing fights.

If you get hungry, the store sells snacks and beverages, or you can have the neighboring pizza or Mexican restaurant deliver food to you at the game store while you are playing a game, unless it’s one of the borrowed games. Overall, the store has everything you could want if you are into board, card, roleplaying, or dice games.

The store is open every day of the week (noon-10 p.m. Monday though Saturday and noon-8 p.m. on Sunday), but Laza might keep the store open longer if you need to stay a little bit later to finish your intense D&D adventure. For more information, call 602-531-0433.