Cannedy Performing Arts Centre, celebrating 30 years as a dance studio for children through adults, is expanding its efforts from the North Central Phoenix area to Prescott.

Owners and the husband-and-wife team of Pam Cannedy and Stepan Oleksyn are also getting involved in the arts community in Prescott, where they are choreographing shows at the Prescott Center for the Arts (PCA) and teaching at the Elks Performing Arts Center. 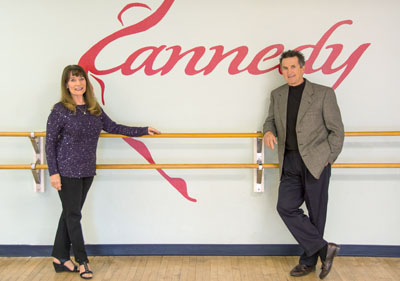 In addition, Cannedy’s “Studio C” is physically moving from Phoenix to Prescott, where it will become PCA’s dance room and rehearsal space in the nonprofit’s new $2 million theatrical facility.

Cannedy began visiting Phoenix in 1972, and moved here permanently in 1981, after more than seven years of choreographing and performing in dinner and community theaters throughout the Midwest. She met a new director for the city of Phoenix Parks and Recreation Department, who was hired to revive the city’s theater department at Third Street Theatre, with “Pippin” as the first show. Cannedy was hired as choreographer, which led to many more shows with her at the choreography helm at the theater.

In addition, Cannedy began teaching tap and jazz classes in the same building, and held dance shows there for the next seven years. Then, Cannedy and Oleksyn were driving down 7th Street, close to their house, and saw a place for rent.

“Stepan and I always talked about how nice it would be to have a dance studio close to home, so we could avoid the heavy morning traffic, freeways, and so forth. There was our answer.”

The Cannedy Performing Arts Centre opened in the fall of 1988. Eventually, one studio unit turned into three and then four.

In the early days, Cannedy taught every class from beginners to advanced students in ballet, pointe, tap, jazz, aerobics, and more, in addition to choreographing musicals and working full time. Now with more than 16 employees, Cannedy says they are fortunate to have great support over the years.

“Growing ‘Cannedy’ into a 30-year business in the community by teaching dance and theater arts to children—and now, to their children and yes, grandchildren—is truly our blessing,” she said. “We take nothing for granted, and give thanks every single day that we still have the privilege of enriching the lives of so many children and adults by promoting arts education.”