When Arizona achieved statehood in 1912, the young Catholic men and women of Phoenix had no high school to call their own. Just five years later, in 1917, the Sisters of the Precious Blood established Saint Mary’s, the first Catholic high school in the state. 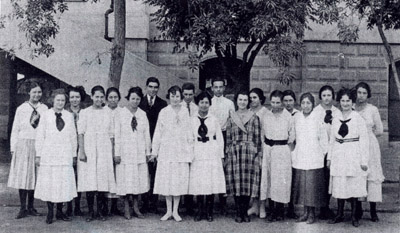 At first, the Sisters ran Saint Mary’s out of borrowed classrooms in Saint Anthony’s grammar school, but after two years they were finally able to break ground on Saint Mary’s first school building.

On Oct. 21, Mary’s will celebrate a century of Catholic education at the Saint Mary’s Catholic High School Centennial Gala, set to begin at 5:30 p.m. at the Sheraton Grand Phoenix, 340 N. 3rd St. Tickets are $250 per person, and many sponsorship opportunities are available.

Beth (Wischer) Wand and Barbara Bandura are serving as Gala co-chairs. Wand is an Arizona native, ’00 Saint Mary’s Catholic High School graduate, and the director of operations for Sunland Water Company, a utility company in Southern Arizona. Bandura is First Vice President Business Relations Manager at Midfirst Bank. Both women are actively involved in the community, both professionally and through philanthropic endeavors.

“This is a big year for Saint Mary’s, and we are truly excited to be a part of the celebration,” said Wand. “With such an extensive history here in Phoenix, our network of alumni is strong and deep. This year’s Gala will help Saint Mary’s continue its legacy of forming virtuous young men and women through its strong liberal arts curriculum, athletic programs and Catholic education.”

Saint Mary’s graduate and outfielder for the Los Angeles Dodgers, Andre Ethier, has signed on as the platinum sponsor of the Gala. Ethier lives in Glendale with his wife and three kids.

Tickets and sponsorship information for the Saint Mary’s High School Centennial Gala, which includes a cocktail hour, live and silent auction, and music, can be found at http://www.smknights.org/100. For more information, call 602-251-2506.