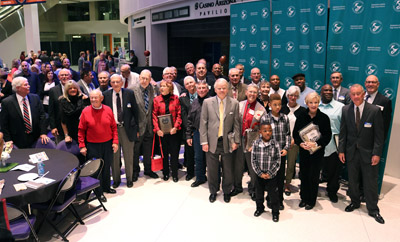 Among the 54 inductees were 13 coaches and 34 athletes and a few who both played and coached at PUHSD schools. The program also recognized 70 state championship teams.

Special inductee Jim Brock played and coached at North long before his Mesa Community College and ASU coaching careers. Martin “Pug” Marich earned fame as Phoenix College’s baseball coach, but he began his career at Phoenix Union in 1947, and became the first football and baseball coach at Central High School in 1957.

The inaugural event last year honored 44 inductees from as far back as 1913, as well as some “modern era” coaches from 1950-present.

“We had such a terrific response from the sports community after last year’s event, and we had another star-studded lineup for this year,” said Zachary Muñoz, Phoenix Union athletic director. “Phoenix Union has had such a rich and successful tradition of championship teams, players and coaches, that we are still playing catch-up.”

As a commitment to the legacy of athletic excellence in Phoenix Union, a Male and Female Athlete of the Year scholarship was established by the PUHSD Sports Hall of Fame.  Aldo Fernandez, Alhambra baseball, and Najiyyah Pack, South Mountain girls basketball, were the first Hall of Fame Scholarship recipients. Both led their teams to state championships last year.

For more information, visit the Phoenix Union Foundation for Education at www.foundation4education.org. Refer to the Central High Alumni Facebook page to comment or message to nominate a former PUHSD outstanding athlete for next year.