Garcia returns to Brophy as coach

For almost four decades Brophy baseball patriarch Tom Succow has led the Broncos but, with his retirement, Josh Garcia, a Brophy alum, will suit up again in a red and white uniform. 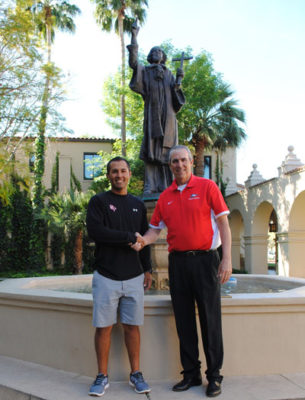 Garcia currently coaches at South Mountain Community College where his duties include recruiting coordinator, hitting coach and director of the Student-Athlete Success program. He has also served as an assistant coach at Yavapai College and at the University of Arizona, his alma mater, where he was on the coaching staff of the 2012 NCAA D1 National Championship team.

Garcia was an integral part of Brophy’s 2006 state champion team and the 2007 nationally ranked team that ultimately settled for runner-up status at state. Garcia was selected by the Arizona Diamondbacks in the 46th round of the 2007 draft.

After Brophy, Garcia attended South Mountain Community College where he was an Academic All-American both years before moving to the University of Arizona. He played in the NCAA regionals for the Wildcats in 2010 and 2011, serving as team captain. In 2012 he received a bachelor of arts in religious studies, with a minor in sociology.

Garcia’s first goal is to develop complete men on and off the field. “I want to help cultivate young men who are mentally tough, who can deal with adversity with poise, who are able to develop a plan for any problems that arise, and who embrace and enjoy competition,” he explains. “These qualities will help them succeed not only on the field, but wherever life takes them after Brophy.”

He also notes the roles coaches have played in his life and wants to be a similar kind of mentor. Of Succow he says, “Since leaving Brophy, we haven’t gone more than a month without talking on the phone—more about life than about baseball.” And of Andy Lopez, his former coach and boss at Arizona, he says, “He showed me a fair share of tough love and it was all in my best interest. He trusted me enough to give me my first job in his program.”