This holiday season, the tiniest among us received the warmest of gifts. 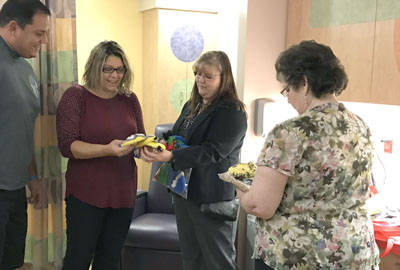 From left: Hayden and Sage Harper, whose son, Trigger, was born on Thanksgiving Day, accept a new crocheted hat for the baby from Theresa Richards and Pamela Martin, both Cigna employees and volunteers with “A Common Thread” (photo courtesy of Banner-University Medical Center).

“A Common Thread” is the name of a group of Cigna employees who started a community service project as a result of Cigna’s national sponsorship of the March of Dimes. Their annual project involves crocheting hundreds of tiny caps for babies in the hospital.

More than 700 babies are admitted in the NICU at Banner-University Medical Center every year who are facing a health complication that requires them to be hospitalized for continuing care.

Since “A Common Thread” started, more than 10,000 baby hats have been donated to NICUs throughout the country and more than 2,500 have been donated in Arizona. Cigna has been a partner of the March of Dimes and a national sponsor of March for Babies for the past 22 years.