By Teri Carnicelli
The fate of a proposed zoning change to allow for 245 luxury rental apartments in an older section of North Central Phoenix rests in the hands of the Phoenix City Council, which is scheduled to vote on the re-zoning request on Dec. 13. 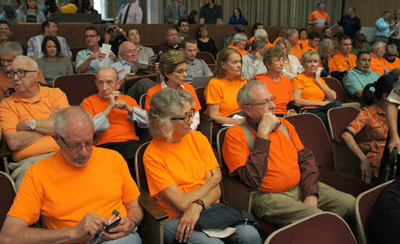 A large contingent of orange-shirt-wearing residents turned out at the Phoenix City Council’s Nov. 15 meeting to protest a rezoning request for a proposed luxury apartment development near 7th Street and Maryland Avenue (photo by Teri Carnicelli).

A large contingent of neighbors in opposition of the zoning change hopes the council votes in its favor, arguing that approving the rezoning request would set a bad precedent for the area, allowing future developers to come in with other high-density developments that are out of character for the neighborhood.

Alta Marlette, a project of Scottsdale-based Wood Partners, is a luxury rental community proposed for just under four acres between Stella Lane and Marlette Avenue, east of 7th Street. The bulk of the project lies behind the strip center that includes Christo’s Ristorante and also juts to the north behind Inman & Sons.

The underlying zoning, primarily R-4 and R-5, plus some commercial, allows for a maximum of 156 units and three stories on that total acreage. Wood Partners wants 245 units, and has come to the city with a Planned Urban Development (PUD) rezoning request that would allow for the higher density and up to four stories.

The City Council first reviewed the case on Nov. 1, and then continued it to Nov. 15 to allow the developer and neighbors to sit down and work together. However, the developer had still not met with the neighborhood representatives by the Nov. 15 meeting, so the case was continued again.

Neighbors are worried that if the PUD is approved, it will open the door for other developers to come to the city with high-density infill projects in the midtown corridor using the same rezoning method to get around existing zoning height and density limits. Currently at least two other developers are considering similar projects within a couple of miles of Alta Marlette but much closer to existing homes.

“The facts don’t support approving a conceptual PUD at double density in an area that has no sidewalks, multiple schools, numerous churches and a large walking religious community,” said Mary Crozier, president of the North Central Phoenix Neighborhood Association, one of more than 15 neighborhood groups that oppose the re-zoning request.

“No one opposes development of this parcel, but we oppose the extreme density, expanded lot coverage, traffic safety and the precedent this would set for all neighborhoods in Phoenix,” Crozier added.

“This area has opportunity for employment in numerous locations, and it has a revitalized dining district to the south,” said Wood Partners’ zoning attorney Stephen Earl of Earl Curley & Lagarde. “What it does not have is multi-family at the luxury level, so we are bringing in a whole new demographic.

“Nearby multi-housing is 40-60 years old,” he pointed out. As for the density issue, Earl argued that the developer had already made a significant concession, coming down from its 270 units that were first proposed, and reducing the height to three stories along Marlette. To come down far below the now 245 units that are planned, to the neighbors’ request for 170 units, would not be possible, he said.

“All the attributes of this luxury development are integrated together. You can’t just slice off a piece and lower the density,” Earl pointed out. This project includes several amenities for its renters, including a fitness center, large “front room” with a full kitchen for residents to meet and socialize, clubroom, game room, resort-style swimming pool, spa, barbecues and cabanas.

“We are talking impact versus image,” said John Hathaway, who lives on Maryland Avenue. “Mr. Earl talks about how luxurious this is going to be. Image is not enough. Impacts are what change our community.

“The responsible thing is to vote against this,” Hathaway told the Phoenix City Council on Nov. 15. “There are too many unknowns, too many risks to our community. We do not want this.”

There also is a lot of concern about the number of cars that would be entering and leaving this development from Stella Lane, which the developers have said will be the only vehicle entry and exit point. However, with no streetlight there, but one to the north at Maryland Avenue and one to the south at Rose Lane, there is a very real chance of cars cutting through the neighborhood to avoid turning left onto 7th Street in the morning when the reverse lane is in effect. Maryland is already backed up in the morning heading eastbound because of the school crosswalk at 10th Street for Madison Traditional Academy.

The same traffic issue arises for southbound cars waiting to turn left onto Stella Lane after 4 p.m., when that center lane becomes a northbound traffic lane, causing cars to back up in the southbound “fast lane.” Residents argue it’s a dangerous situation that will lead to car accidents and traffic nightmares.

Wood Partners commissioned a traffic study, which was later backed up by drone video that shows there is a regular “gap” in traffic flow on 7th Street in the morning, caused when the signals at Rose Lane and Maryland Avenue are red. During this gap, which occurs every 60-70 seconds, several cars can safely turn left onto 7th Street, they contend.

Plus, if the commercial property and the R-5 property that abut Marlette were developed as is, that traffic would exit onto Marlette and likely cut through the neighborhood. With Stella being the only in-and-out point, “this project, in our opinion, is safer,” said Earl, on behalf of Wood Partners.

The neighbors, however, aren’t buying it. “We feel the city would be culpable if you approve this and there are accidents at this intersection, going forward,” said Sandy Grunow, representing the Phoenix Mid-Century Modern Neighborhood Association. “Be sure you know the risk; is satisfying the developer worth angering the neighborhood and your voters?”

Those wishing to comment on this re-zoning request, whether in favor or opposition, can send their e-mails to Councilman Sal DiCiccio, who represents that area, at council.district.6@phoenix.gov. Reference zoning case Z-27-17-6 in your communications.