By Teri Carnicelli
A house filled with family, friends and food is exactly how North Central resident Ralph Clark wanted to spend his 100th birthday. And that’s exactly what he did—albeit a few days early—as more than 40 people filled the home near 7th Street and Maryland Avenue that he has lived in since 1952. 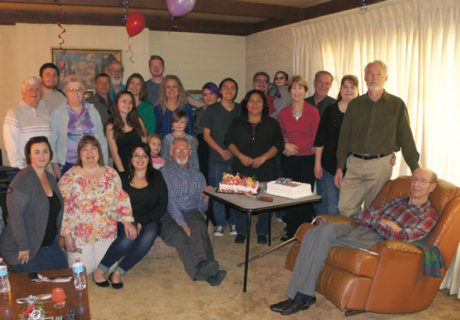 North Central resident Ralph Clark (seated, right) turned 100 years old last month, surrounded by family members from around the country who came to join him on his special day. Clark has lived in his North Central home since 1952 (photo by Teri Carnicelli).

The celebration, complete with catered meal and two birthday cakes (one sugar-free), took place on Jan. 21, and Clark officially hit the century mark on Jan. 25. And he had many stories to share about his life and experiences along the way.

Clark was born in Glenns Ferry, Idaho in 1917. After high school he worked for his father, driving potatoes out to California and bringing back loads of citrus in exchange. He was drafted into the U.S. Army Air Corp on Dec. 3, 1941 and a few short days later, the United States entered into World War II.

“I was supposed to be in for a year and instead I served every day of that war,” Clark recalled.

He went through boot camp in Biloxi, Miss., and was stationed at Bergstrom Air Force Base in Austin, Texas, where he married his sweetheart, Grace, in October 1944. He was released from service one year later, to the month. While in the corps, he served as a radio operator in Aleutian Islands off the coast of Alaska.

After the war ended, he went back to Idaho, working for the now-defunct Fidelity National Bank in Twin Falls.

His father had moved to Phoenix to get in on the citrus farming boom, and asked Clark to come join him. Clark and Grace moved to Phoenix in 1951 and settled into their North Central home a year later, which they bought for a mere $17,500. His house is one of the few original ones left on his street, as the single-story ranch houses have slowly been replaced with larger homes.

Clark worked for his father in grapefruit packing and shipping for just over 20 years. After demand eventually slowed, his father retired and Clark went to work for Ping golf’s Phoenix distribution center, where he worked in customer service and shipping from 1973 to 1986. While there he developed a love of the game and played golf “every chance I got,” he admitted. He finally had to stop playing just five years ago.

“My doctor thinks I’m a whiz,” Clark said with a laugh. “I don’t have cancer or arthritis or heart disease or anything. So he hasn’t had a heck of a lot to do.”

Grace, who passed away nearly 10 years ago, was unable to have children. “It’s just life,” Clark said philosophically. “We just made the best of it and enjoyed each other.” Clark’s two older brothers and two younger sisters provided him with plenty of nieces and nephews—and grand-nieces and grand-nephews, many of whom were at his 100th birthday celebration. Not unexpectedly, he has outlived all of his siblings, and most of his friends.

While he still enjoys tinkering with his ham radios—he’s one of only a handful left in the country who still use Morse code—he does need a little help around the house, and has a caretaker from Home Instead Senior Care come in four times a week.

As probably the only original resident left on the street, he also has developed great friendships with his neighbors over the years, whose children he has seen grow from babies to adults with their own homes and families. Many still pop by for a visit and to drop off the occasional casserole.

“Everyone takes care of me and watches over me,” Clark says. “I’ve been very lucky with the friends and family I’ve had.”