Kimberly Hundley
In some ways, Phoenix is a “here today, gone tomorrow” town where historical buildings crumble in the wake of citified progress, a fact that especially pings the hearts of longer-term residents.

North Central Phoenix homeowners Paul Scharbach and Robert Melikian belong in that camp, and both boast platinum-clad reputations as guardians of the Valley’s past. Melikian lives in a 1950s-era ranch-style home near the Frank Lloyd Wright-designed church on 7th Avenue. Scharbach resides in one of the area’s original neighborhoods, a block near 10th Street and Maryland Avenue, known for its Midcentury Modern architecture. 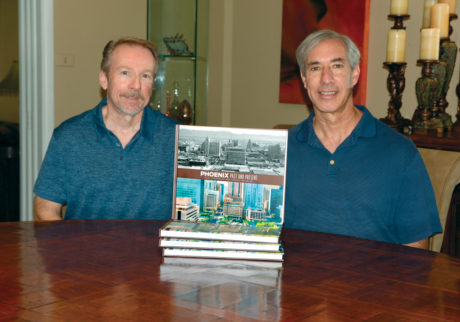 “I love history. It’s a calming, secure thing that connects me to other people,” says Melikian. “You know yourself and society better when you know where you came from.”

This spring, the duo’s passion project, “Phoenix: Past and Present,” hit bookshelves, showcasing the evolution of desert upstart to cosmopolitan city through 84 pairs of past-and-present images, most of which have never before been seen publicly.

“We wanted the book to be simple. People want a little bit of information, and they want to look at cool photos,” says Melikian, who with the help of historian and preservationist John Jacquemart, packed the pithy captions with crucial dates, locales and context.

The man behind the lens, Scharbach, is a second-generation Phoenix native specializing in Valley-specific photography. He wanted this book to be different than previous tomes of the genre, including his own 2005 work, “Phoenix Then and Now.” When he and Melikian teamed up, says Scharbach, they wanted to go larger, with more pages. “We kept coming up with really good photos, so we kept adding pages.”

At 12-by-9 inches and nearly 3.5 pounds, “Phoenix: Past and Present” is an eye-catching, irresistible bundle of full-page vintage photos juxtaposed with contemporary shots from the same vantage point—or at least as close a match as Scharbach could manage. After all, tons of concrete and steel have sprung into the sky like rogue palms in the intervening decades, and he’s not Superman … though he and author Melikian did more than their fair share of scaling tall buildings in pursuit of the contemporary shots.

The pair wrangled bureaucratic as well as physical challenges in accessing downtown rooftops, crawling through windows and balancing on ledges. “We were on the roofs of all the buildings you see—mostly with permission,” Melikian says with a smile.

Figuring out which rooftops the original photos were taken from wasn’t always easy. In some cases, the perches no longer existed, or new construction blocked the desired views, so it was necessary to shoot from adjacent buildings. “There were several skylines we couldn’t match,” says Scharbach.

The discovery of vintage photos with a fresh take on the Valley’s past involved a mix of pure luck and painstaking work: the authors combed through thousands of archived images owned mostly by Arizona State University, and then they connected with Tina.

Tina Cervantes, who worked decades ago coloring and developing film in a camera store in downtown Phoenix, would keep copies of photos she especially enjoyed for her personal collection. After seeing a local cable TV show featuring Melikian, whose family owns Phoenix’s famously haunted Hotel San Carlos, she called the Historic Preservation Office to say how much she enjoyed the production.

As fate would have it, Melikian himself picked up the phone. The two got talking about his upcoming book project, and Cervantes offered access to her private photo collection.

“We handpicked 84 different images,” he says. “You could do several books from what she has.

“Phoenix: Past and Present” is available locally at Changing Hands-Phoenix, 300 W. Camelback Road. It also can be purchased on Amazon.com.