Home / Features / A cool building with even cooler tenants

A cool building with even cooler tenants

By Teri Carnicelli
An aging strip center at the northwest corner of 12th Street and Highland Avenue that formerly housed addiction counseling services, a smoke shop and a debt-collection call center has seen a complete overhaul—inside and out.

The original designer of this two-story, L-shaped building was architect Bennie Gonzales, an Arizona native who left his mark around the Valley with more than 200 eye-catching structures, many of which still stand today. The building was completed in 1963. 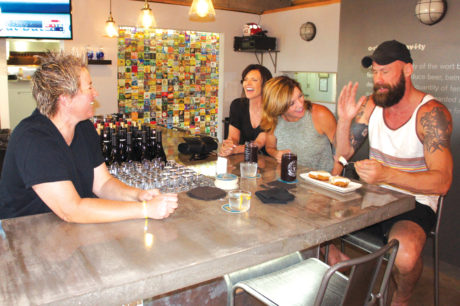 From left: Natasha Turra and Michelle Bocchino, two of the three women behind the new Original Gravity bar and restaurant, chat with regular customers Jen Macarenas and Corey Krebs. Krebs, originally from Florida, says “OG” has the best key lime pie he has had outside of his home state (photo by Teri Carnicelli).

More than 50 years later, the façade had seen better days, and what businesses there were housed inside it left something to be desired, according to residents of the adjacent neighborhoods.

Enter Bill Tonnesen, a design-build developer and artist/sculptor, who was talked into investing into this commercial redevelopment project by a friend. Tonnesen had always admired the designs of Gonzales, in this particular case, his use of steel, and cement floors and beams for the structure, rather than the overabundance of wood seen today. As an artist, Tonneson also liked the modernist geometry of the design. “I’m interested in the raw look of the materials themselves,” he explains. “I guess you could call it a kind of ‘deconstruction’.”

Tonnesen and his then-partner closed escrow on the building at 4700 N. 12th St. in December 2014, and work began almost immediately. And a lot of work it was—all the plumbing and electrical had to be replaced, linoleum had to be scraped off the aging floors, the outside had to be sandblasted back to the bare concrete…. and then there was the asbestos.

Tonnesen’s partner had to bow out for personal reason, giving him the option to buy out his share. Tonnesen and his wife, Pilar, who own Tonnesen Inc., jumped at the chance. Even though they were investing a lot of money in the renovation, they knew it would be something special when it was done, not just architecturally, but also for what it could bring to the surrounding community.

Rebranded “The Strip,” the building attracts the eye with its mix of raw concrete and brick, with steel accents in both silver and a rust-like finish. He added matching concrete patios and attractive landscaping, include date palms, jasmine, and a row of repurposed 55-gallon drums with potted coffee trees. But beyond first blush, the real attraction is what lies inside.

Here you will find an eclectic mix of tenants, from real estate companies and architectural firms, to a popular personal training studio (Pamela Young Fitness) and a trendy hair salon (Kami Sori). Inside, the metal and concrete themes continue through most of the suites, which each have their own unique twist. Tonnesen even designed and fabricated some of the metal accents in the Kami Sori salon, which gives it a cool, funky and unique vibe.

The latest additions downstairs are two new eateries that are as fun as they are different from each other.

Phoenix residents Glen Nielsen and Liza Asbury started DK Dogs on a whim after visiting Glen’s family in Denmark in the fall of 2014. By February 2015, they had a cart on the streets of the Phoenix Metro area.

The business has expanded to two hot dog carts and their first storefront, which opened in May at The Strip, at the far north corner.

Glen was born and raised in Denmark and has lived in the United States for more than 20 years. For the last several years, he had the idea to bring the European-style hot dog to the Valley. He thought it would be popular with those who were bored of the standard hot dog fare offered here—and so far, he’s been proven right.

“The Danish Style hot dog is our most popular item, it is topped exactly how you would get it on the streets in Copenhagen,” Liza says, including mustard, catsup, Danish remoulade, fried onions, raw onions and pickled cucumbers. The eatery’s remoulade is imported from Denmark, and fresh pickled cucumbers are made weekly. Traditional “American” hot dogs are available as well, including one with chili.

DK Dogs serves only 100-percent beef franks that are nitrate-free and gluten-free. They also contain no by-products, corn syrup or “fillers.” Delivery is available via UberEats, GrubHub, Postmates, and DoorDash. For more information, call DK Dogs at 602-831-4878.

Three Valley women joined together to open a niche wine bar at the far west side of The Strip, dubbed Original Gravity.

Original Gravity is a concept created by Natasha Turra, Michelle Bocchino and Holly Knudsen, who all left their previous jobs to pursue this passion.

“We have been working on this concept for almost two years,” Turra says. “We came together over numerous conversations about ‘if I had a bar I would … .’ We all have diverse backgrounds and wanted to partner to utilize our strengths.”

Turra says the goal was to create a fun, casual, modern vibe in a space where you felt comfortable with friends, co-workers and dates, while enjoying happy hour, a special occasion, etc.

Original Gravity, which opened in May, offers beer, wine and wine cocktails, with a menu of fairly substantial salads, sandwiches and a whole lot of smothered French fry selections (Turra is originally from Canada). The fries are crispy on the outside and tender on the inside, and must be accompanied by the “secret sauce,” which is magical.

The bar is in the process of updating the menu to add more food selections, particularly to the happy hour menu. Happy hour is 3-6 p.m. Tuesday through Friday, and includes $1 off pints and tap wine. You can keep up-to-date on the rotating selections of tap beers by using the app, Untappd, and finding Original Gravity in the list of member bars (for use with iOS, Android and Windows).

This month, a weekend brunch will be added, along with opening Monday nights for NFL games (currently closed), and Saturday mornings at 10 a.m. for college football games (limited menu of snacks served). Look for any upcoming changes on the Facebook or Instagram.

While parking wraps around three sides of the building, it is only single-space pull-in spots. Tonnesen has penned cross-parking agreements with two neighboring businesses across the street to help with the issue. Visitors coming after 5 p.m. weekdays and anytime on weekends can park behind the Southwest Network behavioral health services building at the northeast corner of the intersection, and in front of Artisan Prosthetics, across the street from Original Gravity.