By Patty Talahongva
Pork on a Fork is celebrating its one-year anniversary this month at the Camelback Colonnade, 1949 E. Camelback Road, Suite 140. You could say, however, the idea has been simmering for more than 15 years for the two owners who now sell barbecue meats they slow cook for more than 15 hours.

Wes Hansen and Justin Erickson are from Nebraska. “We grew up on hog farms,” says Erickson. Both grew up feeding the hogs, cattle and chickens. Hansen helped bale hay and cut weeds, a chore he did not particularly enjoy doing. 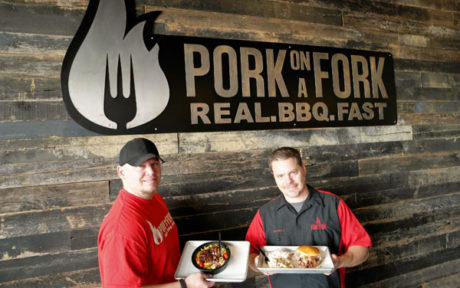 The BBQ Bowl is a customer favorite as well as a favorite of Wes Hansen, co-owner of Pork on a Fork (left). His partner, Justin Erickson, shows off the pulled pork sandwich, another favorite. The meat is slow roasted for at least 15 hours (submitted photo).

Erickson’s father was the one who got the barbecue bug first, recalls his son. On weekends he would sell barbecue sandwiches in Nebraska and his son would help him. That was the kindling of Erickson’s own interest in opening a barbecue restaurant.

It wasn’t a direct path for either of them. Both ended up going to college and eventually moving to Arizona, where they became roommates. One weekend they found themselves at a farmer’s market and noticed there was plenty of beef and chicken to be purchased, but no fresh pork for sale. That led Hansen to call his father in Nebraska. Soon, his dad was driving a car packed full of natural frozen pork to Arizona.

The two friends took it to the farmer’s market and they sold out. Very quickly a carload wasn’t enough to satisfy customers’ demands, so they went to a cargo van to transport the pork and eventually they had to hire a trucking company to keep up with the demand.

From there it was almost a natural next step to sell pulled pork sandwiches at farmer’s markets. That, too, took off quickly—prompting them to open their first restaurant on Deer Valley Road. Erickson quit his job and focused on the business. That business has boomed for the past five years and one year ago in February the partners opened their second restaurant on Camelback Road, thanks to one of their regular customers

The customer was also a real estate agent who told them about the space for lease. They liked the location because of its business corridor. They set about turning the space into a rustic but modern restaurant. Erickson’s father built the benches and tables. They bought 110-year-old barn wood from Pennsylvania to line the wall at the entrance, and they had a metal sign made with their logo that will patina over time.

Customers order and pay at the counter and then take a seat either in the main dining room or in the side room where two television monitors are set to local news or sports.

Pork on a Fork offers barbecue sandwiches, salads, burritos and bowls plus 10 sides to add to your meals. The meats are all natural, fresh, never frozen and have no antibiotics. You can even order a meatless option. Prices range from $8.69 to $24.99 for a full rack of babyback ribs. You also can pick up family dinners for a group of five people for $54.99 or a group of 10 people for $99.99. Those dinners feature all the smoked meats—ribs, pulled pork, beef brisket, pulled chicken and smoked sausage. The family dinners also include three side dishes.

The kids’ menu has six items ranging from a Polish dog to a meat or cheese quesadilla. The average price is $4.99. On Mondays kids eat free with a paid adult meal.

To ensure consistency in the taste of each item, all the meats are smoked every day. They also make all their own side dishes and barbecue sauces. For customers with a gluten allergy, the sweet and mild sauce is gluten free.

The eatery will offer a prime rib night beginning on Valentine’s Day. The dinner will include a 12-ounce cut with two sides for $24.99. The Valentine’s dinner special will include a few wine selections. Beer is offered on the regular menu.

The partners are hoping for continuing success, despite being in a challenging industry. “It’s our baby, our creation,” says Erickson. “This is my kid.” His partner agrees. “You learn really good work ethic on a farm,” adds Hansen, who says that good work ethic has made their business successful. “Everybody counts on us—the customers, our employees.”

USA Today named Pork on a Fork one of the Top-10 barbecue restaurants in the nation. The duo recently signed a deal with Talking Stick Resort Arena and now sell their food on the main concourse near section 104. Look for them on a segment on the Cooking Channel. They will post details on their social media for a viewing party at the restaurant.

It’s been hard work but Erickson says he had to take a chance. ”I had to give it a try or regret it. It’s better to try and fail than not try it at all. That’s the way I’m wired.”

The catering menu offers a few more items such as turkey, ham and chicken wings. They also have a vegetarian burger on the catering menu. They can do a complete set up for parties or drop off the food for a group.

To see the restaurant and catering menus, visit www.porkonafork.com. For more information, call 602-884-8227.