By Patty Talahongva
The menu at Veggie Village, 1255 E. Northern Ave., is full of delightful and tasty surprises for the non-vegetarian. The family business, headed by Shaw Wei Lee, just celebrated its one-year anniversary and is going strong even though the restaurant is closed on Saturday, normally a bustling day for the food industry.

The first thing you’ll notice when you walk in is the business slogan printed on the wall: “The fundamental reason for being a vegetarian is to develop unconditional compassion, love, kindness, respect for all life and protection of the environment,” the first part reads. 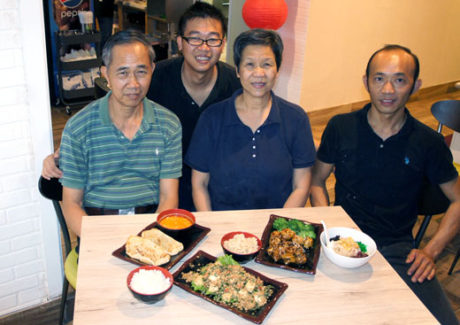 Veggie Village is a family affair with Shaw Wei Lee (back row), son and manager overseeing the restaurant along with his father, Yoon Lee (left) and his mother, Mee Chin. She is the creator of the recipes while Kee Lam (right) serves as head chef. Here they present, from left: Roti Prata (fry bread and curry sauce), Oatmeal Tofu, Sesame “Chicken” (mushrooms), and Kachang, which is Malaysian shaved ice (photo by Teri Carnicelli).

It continues, “Veggie Village’s objective is to provide an environment in which more people can understand vegetarian food and discover that it can be delicious and have a wide range of food choices.”

With that introduction, you may look at the meatless food in a whole different manner.

“Our focus is introducing vegetarian or vegan food to non-vegetarians,” says Lee.

Dishes such as the King Oyster Mushrooms feature mushrooms that taste like chicken. The sauce is made with black pepper and butter. Diners also can order a vegan version of most menu selections.

People new to vegetarian dishes are more comfortable trying the Orange Peel Chicken, Kung Pao Chicken, Sesame Chicken or the General Tso Chicken. In most cases, the “chicken” is either a soy-based substitute, or in the case of the Sesame Chicken, large, breaded and fried mushrooms.

Lee chuckles when he recalls his father, Yoon Lee, giving a locksmith who came to do some repairs a complimentary Kung Pao Chicken dinner. “He didn’t even realize it was vegetarian food. That made me feel like this worked out,” says Lee.

Curry dishes are also popular and are served with rice, which Lee loves. “You can’t go wrong with that. Good sauce with rice is really nice.”

Mushroom sauce, dark soy sauce, salt and pepper are some of the basic spices that flavor the foods, as well as curry powder and lemon grass. All 42 dishes on the menu come from his mother, Mee Chin.

A must-try is the Oatmeal Tofu, because the taste is amazing and nothing you might expect. Deep-fried tofu sprinkled with toasted oatmeal and toasted curry leaf is a surprise for your taste buds. If you have someone in your dining party who is a less adventurous eater, there is a standard veggie burger available as well.

A recently introduced drink is the Honeydew Chai Seed juice, blended with coconut milk, which offers a unique taste that Lee says comes from the Pandan leaf, boiled with sugar. The drink itself is not overly sweet. If you are looking for something on the sweeter side, try the Malaysian shaved ice, also known as Kachang. It comes with plum sugar, sweet red beans, and different flavors of small gelatin squares.

Appetizers, salads and soups range from $3 to $6, entrees average $9. Lee says a family of four can easily eat for $50 plus tax. Dinner he says, “is reasonable.”

By day Lee works as a computer tech contractor for Luke Air Force Base. His family immigrated to the United States in 2003 and he attended college at Wichita State, in the land of beef and steak, as he puts it.

But Lee has been a vegetarian since he was 17, influenced by his father. When the family first came to Arizona they quickly noticed a lack of vegetarian restaurants with food that appealed to them. So the idea of starting a family business started to take root.

At the same time they were attending a Dao Temple where his mother would cook for the congregation. “People really liked it,” he told his mom. “People like free food,” she responded. Still, other relatives urged them to open a restaurant.

Once they decided to do that, things seemed to quickly fall into place. They took over the location of their restaurant from a friend. Then they thought of a name. “Most of the Chinese restaurants like to use House or Dragon in their names,” Lee explains. Since most of his family grew up in a village, he says they decided to use that word along with the friendly sounding “veggie.” The double V also represents double victory.

Lee is happy because business is not bad, considering the restaurant is closed on Saturday—a day the family attends temple. His customers give him good suggestions, and his mother has another 200 recipes to eventually add to the menu.

The best compliment, says Lee, is when a meat eater cannot tell the difference. “That’s one of our objectives,” he says, “to introduce vegetarian food to meat eaters.”

He would like to build his catering business and says he has catered meals for up to120 people. Lee and his staff will deliver and set up the food for catering orders.