Freshening things up at Gallagher’s

By Patty Talahongva
Two sisters took over the family business in March and immediately started doing some spring cleaning at Gallagher’s, 7575 N. 16th St., changing out some flooring and lighting and streamlining the menu. 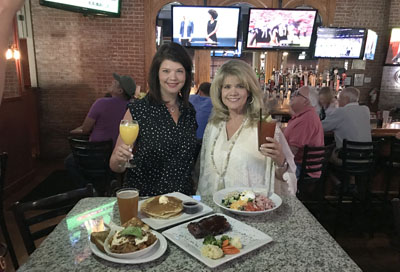 Molly Butler Lewis, left, and her sister Amy Butler Prechel recently took over operations at Gallagher’s, started by their father 31 years ago. They expanded the already good-sized menu to include brunch items like The Best Play skillet and plate-sized pancakes, as well as added more salads like the Ty Cobb. Their lip-smacking baby back ribs are still a house favorite, smoked for added flavor. Wash it all down with a mimosa, Bloody Mary, or one of 33 craft beers (photo by Teri Carnicelli).

Amy Butler Prechel is the president and director of operations of the business, while Molly Butler Lewis handles the public relations. Their mother, Earlene, is the owner.

Their father, Ben, opened Gallagher’s 31 years ago along with other investors. The location on 16th street opened 22 years ago. Since then the company had grown to as many as nine locations, but eventually reduced down to the four Valley locations that operate today.

The sisters take pride in the fact that several staff members have worked at Gallagher’s for more than 20 years, and many customers are “regulars”. They want to build on that foundation.

Unlike most children of restaurant owners, Prechel and Lewis didn’t grow up working at Gallagher’s. They both went to college and Prechel did end up working in the restaurant business while her sister became a first-grade teacher.

Now, as they take the helm of the family business, they are adding their own flair to the restaurants—including changing the old green sign to bright red lettering. Still, it many ways, the concept retains their father’s dream. “It’s the oldest family-owned sports bar in the Valley,” says Prechel with obvious pride.

For sports fans, the large restaurant offers three audio zones so chances are you can hear your favorite team play while chowing down on everything from wings, soups, salads, ribs, flatbreads or pancakes— and still plenty more to choose from.

All the meat is smoked, imparting a nice flavor you don’t get by baking or frying. “We’re known for our wings and our build-your-own-burger,” says Prechel. The Big Ben Burger is named for their father. They renamed the “Gallaburger” to the Home Team Burger. So if you don’t see an item you liked on the old menu, ask your server and they will let you know if it was just renamed. They have a gluten free bun and offer several vegetarian options as well.

Every Friday night, all-you-can-eat cod with French fries and coleslaw is available for $13. A new addition is a half-pound hot dog for just $7, which is fast becoming a customer favorite. Also new to the menu are the flatbreads. “Those are super delicious,” says Prechel.

The average price for dinner for a family of four is $45, not counting drinks. “We’re very value conscious,” says Prechel. There is a daily special, which the servers will tell you about. Gallagher’s has a full bar and features 33 craft beers, several of which are from local breweries.

All items on the kids menu are $5.99, and kids also get a bottomless cup of a soft drink.

Brunch is available on Sundays from 11 to 1 p.m. Try The Best Play egg dish. It comes in a skillet with a generous portion.

For the holidays, Gallagher’s will offer Black Friday bonus deals. If you buy a $100 gift card, you will get a bonus card worth $25. If you purchase a $50 gift card you’ll get a $10 bonus card. A Cyber Monday special also is planned, check the website for details.

Now through the end of December, Gallagher’s is raising money to fight autism, which hits close to home for some employees of the restaurant. For $12 you get 1 pound of riblets in Fireball BBQ Sauce and half of the proceeds will be donated to the Southwest Autism Research & Resource Center (SARRC).

Sports fans will enjoy the multiple large TV screens throughout the restaurant, featuring a variety of games. Happy hour is 11 a.m.-7 p.m. seven days a week, and reverse happy hour is 10 p.m. to close. When a sporting event isn’t playing on their many TV screens, they show animal bloopers, which seem to equally captivate the diners. Diners also can try their hand at electronic darts, Golden T (it’s a golf game) and karaoke on Saturdays. There also is live music on Fridays, trivia on Thursdays and if it’s your birthday, let them know and you’ll be treated to a cookie sundae served in a skillet.

Gallagher’s offers drop off catering or you can reserve a room to host a private party. There’s no rental fee, just your food and drink order.

The sisters, both who live in North Central Phoenix, eat at least one meal a day at their restaurant and do have their favorite dishes. “I love the wings,” says Lewis and adds, “The cheese curds, they’re really good and the ribs, we have dynamite ribs!”