Customization is key at Gadzooks

By Patty Talahongva
There’s something new at Gadzooks Enchiladas & Soups, 3313 N. 7th St., and it’s served from 8 to 11 a.m. daily. Owner Aaron Pool says he didn’t have a big public relations event to announce that breakfast was being added to the menu. Perhaps it’s because it consists of one item—the Breakfast Taco. However, true to the Gadzooks formula, you can order that one item at least a dozen different ways by choosing your tortilla, meat, toppings, salsa and cheese. You also can go vegetarian. 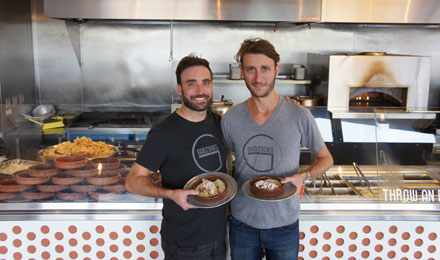 Jared Pool, left, has joined his brother Aaron Pool, founder of Gadzooks Enchiladas & Soups, for the expansion of the business, with a second location set to open this month near 40th Street and Camelback Road. The eateries specialize in build-your-own enchiladas and tacos (photo by Teri Carnicelli).

“We’re just letting customers find out,” Aaron explains. A tiny chalkboard near the register announces the new item. So far customers have noticed and seem to really enjoy stopping by for a quick and tasty breakfast, he says. If you’re really hungry, get two tacos, which will fill you up for less than $10.

It’s not the only thing new for this businessman-turned-restaurateur. Soon, he and his older brother, Jared, will open a second location near 40th Street and Camelback Road. Jared is not an owner in the current location, and he left his dentistry practice to go into business with his brother at the second location which is right on the canal, or as he says, “It’s waterfront property.”

So how does someone go from dentistry to enchiladas, and trade Silicon Valley for the Valley of the Sun? It started with both brothers bonding over the joys, and frustrations, of running a successful business, says Jared. Soon the brothers started meeting regularly in Las Vegas, a convenient middle point between Phoenix and San Francisco, and a new plan was hatched. “Aaron was ready to expand, but ‘franchise’ is a bad word in Aaron’s vocabulary, because quality control is his top priority. So he was looking for potential investors right as I was thinking about moving back closer to home.”

Aaron, who earned a business degree from Arizona State University, didn’t have a culinary background when he decided to follow his dream of creating an enchilada hot spot. But the brothers say, they are loving what they do and wouldn’t change a thing. In fact, the third Pool brother, Drew, owner of the popular local boutique brewery and tap room, Wren House, will partner with Gadzooks to create a custom Bavarian-style hefeweizen beer, available exclusively at Gadzooks.

Both restaurants will have the same build-your-own enchilada or taco menu. You start by selecting the type of tortilla you prefer, corn or the 50/50—which is half corn and half flour and extremely tasty. Then you select the meat you want, such as roasted tomatillo chicken, green chile pork shoulder or short rib (at lunch you have a bison option). You can select other items such as cheese, potatoes or cornbread. Pick a sauce and add more things like an over easy egg or hand-smashed guacamole. It’s all about customizing your order to exactly what you want.

Each dish is less than $10, not including your drink. You also can get a chopped salad, homemade tortilla soup, spicy potato corn chowder, or Head Honcho’s Nachos. Aaron says customers can easily order vegetarian or even vegan tacos and enchiladas.

Continuing their focus on “keeping it in the family,” the cookies are homemade daily by the Pools’ mother, Linda. In fact, recipes from their mother are found throughout the menu and it’s what the brothers grew up eating. “It’s similar to what our mom cooked for us,” says Jared.

Other recipes came from the brothers’ own dining experience. When Jared had his dentistry practice in San Francisco, Aaron would visit and get inspired by restaurants in the Bay Area.

Aaron’s go-to meals are the tacos with a corn tortilla. He likes to mix up different flavors starting with either the short rib enchiladas or the chicken enchiladas, and always includes the Christmas sauce (that means both red and green). He likes to add two kinds of cheese, and top it off with an over easy egg. The finisher is the honey vinaigrette or the lava pico de gallo. “After eating that, it’s nap time,” he laughs.

Jared’s favorite is the Taco Festival with the 50/50 corn and flour tortilla. He likes the spicier flavors that include the sweet and spicy cornbread, jalapeño ranch, and cotija hot cheese. The kids’ menu offers tacos or enchiladas for $3.75.

Both locations will offer catering as well, and that includes people ordering just one very popular item—the sweet and spicy cornbread—to bring to a company potluck or family dinner.

After being in business for four years at the first location, Aaron has made a few changes for the new location. The Camelback restaurant will have a walk-up window as well as a drive-through window for to-go orders. Since it’s right on the canal, it also will have a bike rack for cyclists riding by and stopping in for a meal.

At the new location, the tortilla grill will be prominently featured so customers can watch as their taco or enchilada takes shape. They can then be enjoyed on the expansive al fresco dining patio overlooking the canal, which on weekends will allow people to have a more leisurely dining experience rather than dine and go.

Visit www.Gadzooksaz.com to see when the 4031 E. Camelback Road location will have its grand opening (set for some time in December), or call the 7th Street location at 602-279-5080.