The LGBTQ nonprofit youth organization one•n•ten has announced a $275,000 gift from The Bob & Renee Parsons Foundation to complete build-out on a new youth center. The former one•n-ten facility was destroyed through an act of arson in July. 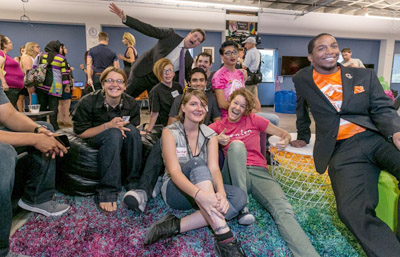 The new center will serve as a hub of activities and support efforts to help youth ages 14-24 deal with challenges they may face from their families, their communities, their own self-discovery and other societal difficulties.

“Renee and I support one•n•ten’s steadfast efforts to break down prejudices and bring greater acceptance to our entire community,” said American entrepreneur and philanthropist Bob Parsons. “The new youth center will be a safe harbor and place of inclusion for LGBTQ youth who, far too often, experience a higher risk of rejection, violence, depression and homelessness.”

The new 5,000-square-foot space is located in the Parsons Center for Health and Wellness in downtown Phoenix on a light rail stop, making it easily accessible to even more youth in the Phoenix Metro area.

It also will house the Phoenix Blended Learning Center, which will provide lesbian, gay, bisexual, transgender and questioning (LGBTQ) youth, as well as straight allied youth in grades 7-12 enrolled in Arizona Virtual Academy (AZVA) and Insight Academy of Arizona (ISAZ), with a safe space to learn.

AZVA and ISAZ are both tuition-free public schools for students throughout the state of Arizona. The center will serve as an onsite facility where students can go for additional in-person instruction and social interaction, with access to the one•n•ten youth center, which hosts daily programs and support services for youth and young adults.

Many of one•n•ten’s administrative offices and several of the organization’s other services have also relocated to The Parsons Center, including its Q High program which serves LGBTQ teens seeking alternative settings from more traditional high schools.

“Support from The Bob & Renee Parsons Foundation has allowed us to build a special place for our youth to gather, find their self-confidence and get the support they need to be vibrant, contributing citizens,” said Linda Elliott, executive director for one•n•ten. “It is a huge, huge gift.”