Home / Community / Young cat is a tiny bundle of purrrrrr

Young cat is a tiny bundle of purrrrrr 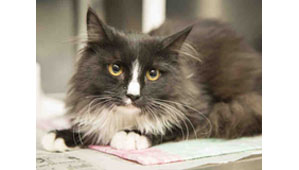 Dafydd is a Welsh name for “beloved,” and that’s how the staff at the Arizona Humane Society feel about this small cat with a big personality (submitted photo).

When the strikingly handsome Dafydd was found lying in the street by a Good Samaritan, the 6-month old kitten was immediately taken to the Arizona Humane Society’s Second Chance Animal Trauma Hospital. It was suspected that he was hit by a car as he gingerly favored his back left leg. Fortunately, his X-rays came back negative for any fractures and with time and love, he soon began using his leg again.

AHS staff immediately fell for him and gave him the name Dafydd, a Welsh name for David meaning “beloved.” While we can’t be certain he had any Welsh ancestors, we can be certain that he would be the perfect addition to any home this holiday season.

Despite Dafydd’s long locks, he is just 4 pounds of playful, purring kitten, yet continues to grow, flourish and showcase the purr-fect personality.

Dafydd is available for adoption at AHS’ Sunnyslope Campus located at 9226 N. 13th Ave. His adoption fee is $150 and includes his neuter surgery, vaccinations, microchip and a free follow-up vet exam with VCA Animal Hospitals. For those interested in learning more about Dafydd, call 602-997-7585, ext. 2045 and ask for animal number A570013. If Dafydd has been adopted prior to your visit, go to www.azhumane.org to see a photo gallery and bios of adoptable pets.