Wordsmiths have been gathering at the Phoenix Writers Club since 1926, when a feisty group of newspaper women weren’t allowed to join the National Press Club—and so started their own networking and support group. 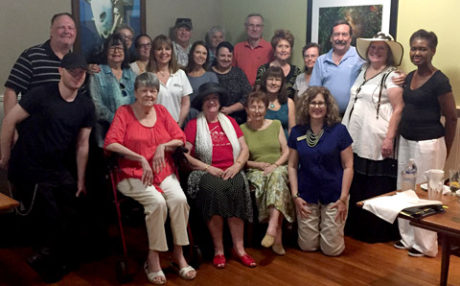 The Phoenix Writers Club has evolved from a group of newspaper women, shunned from the National Press Club, to an organization welcoming all genders, ages, and areas of writing (submitted photo).

The members of the newly formed club drew up the first constitution and bylaws, opening membership to all categories of women writers who submitted published works that met standards set by the membership committee.

Since that time, Phoenix Writers Club has been an integral part of the Phoenix community. During World War II, the members held a silver tea to raise money for British relief. In 1955, National Poetry Day was signed into being by Gov. Ernest McFarland, with the assistance of PWC President Marguerite Graper. At that time, many of PWC’s members were poets.

More recently, the history of one of Phoenix’s long-standing restaurants, Durant’s, was brought to life by PWC member Mabel Leo. Her books were made into a play and later into an independent feature film.

As Phoenix has evolved since 1926, so has Phoenix Writers Club and in 1994 the bylaws were changed and the membership opened to include men. Now in the 21st Century, PWC welcomes all who are interested in writing—established authors, beginning writers, and those who dream of being writers. Club members share knowledge and experiences, and encourage each other to continue their quest for good writing.

“PWC consists of awesome men and women as diverse in personalities as well as writing genres,” said Marge Elza, long-time PWC member and president emeritus. Member Diane Steele added, “[It’s] a group of like-minded people, regardless of genre. Members are welcoming and encouraging in all areas, beginning to end—from drafts to published.”

Now in its 91st year, Phoenix Writers Club meets every third Saturday of the month at Bluewater Grill, 1720 E. Camelback Road. For further information on the club and its members, visit www.phoenixwritersclub.com.